This ongoing surface sampling program will be part of the foundation for the upcoming drilling program designed to materially expand and categorize the project’s oxide gold mineralization.

The following maps shows the locations of the surface samples and mineralized corridors referenced in this news release. 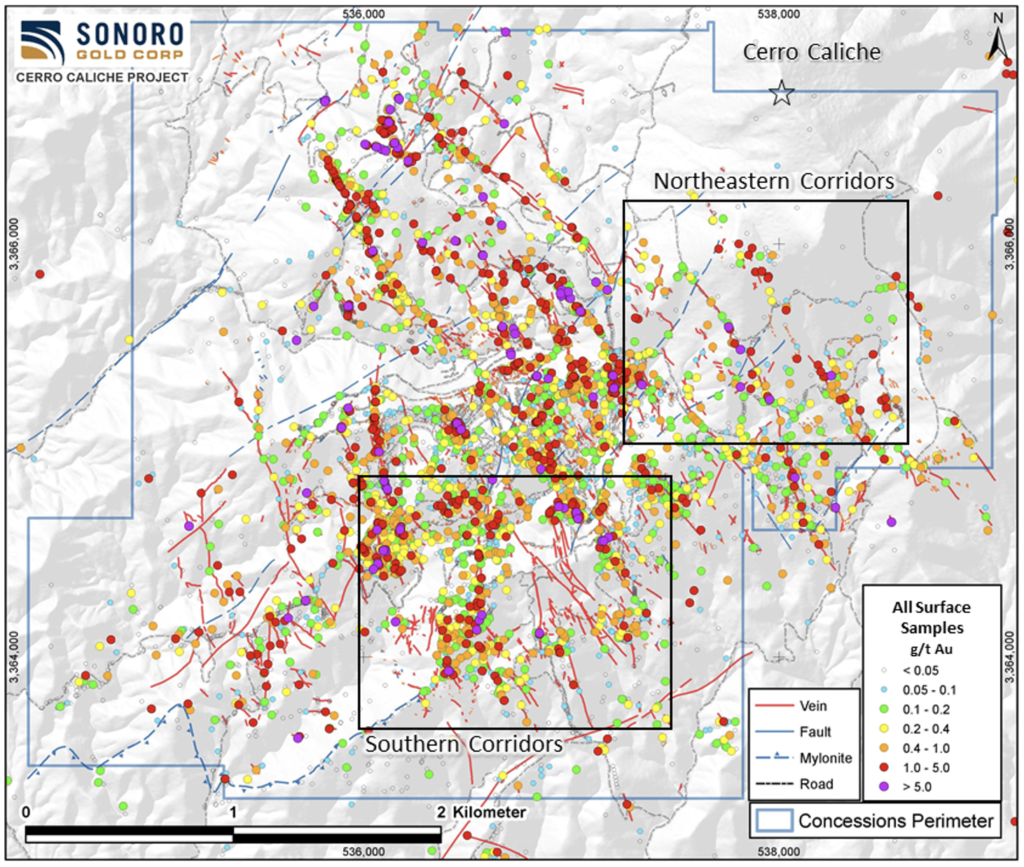 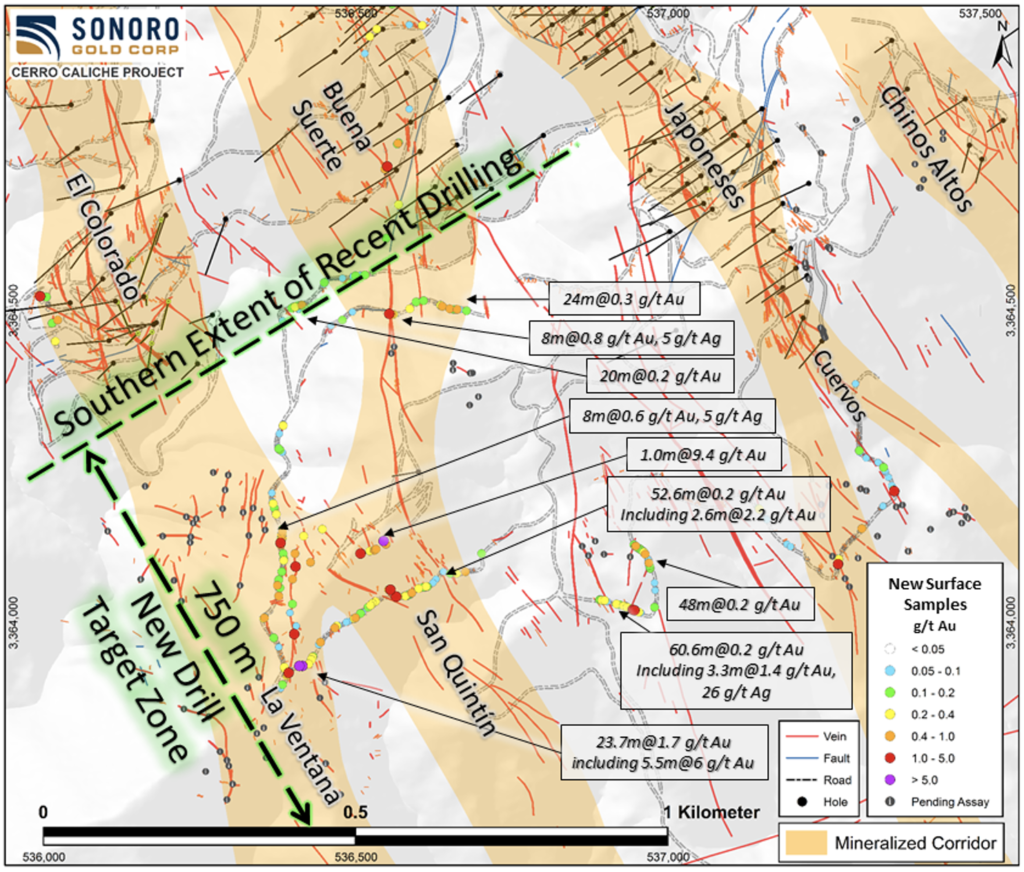 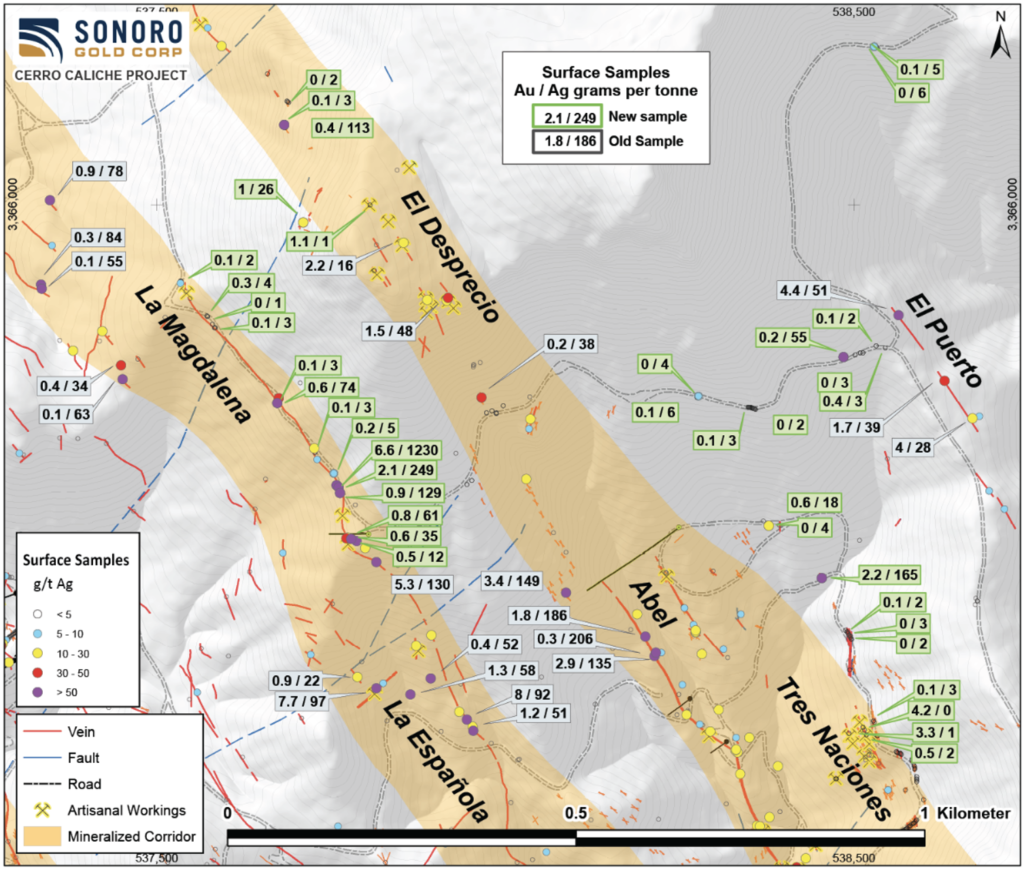 Sampling will continue to focus on near surface mineralized structures which outcrop from thick soil and alluvium and is associated with detailed geological mapping completed in preparation of the upcoming drilling program, scheduled to commence in the fall of 2021. To date, the Company has drilled and assayed results from over 34,500 meters of drilling, including a 24,221-meter Phase III drill program completed in the spring of 2021. When combined with historical data, total exploration at Cerro Caliche totals over 47,500 meters, 433 drill holes and 9,365 surface samples.

Drilling activities on the concession have been paused since May 2021 pending financing and to provide the exploration team sufficient time to ensure all data and assistance was available for the completion of two independent NI 43-101 technical reports, scheduled to be filed by mid-August 2021. As previously announced, the Company engaged Micon International Ltd. to prepare an updated Technical Report and D.E.N.M. Engineering Ltd. to prepare a Preliminary Economic Assessment (PEA).

These reports are expected to expand the resource size and upgrade the classification of Cerro Caliche’s identified mineralization and confirm if it is sufficient to support the Company’s proposed HLMO with an initial operating capacity of up to 15,000 tons per day (tpd).

Exploration at Cerro Caliche has identified a broadly mineralized low-sulphidation epithermal vein structure and the presence of multiple northwest trending gold mineralized zones along trend and near surface. As discussed in the Company’s revised Cerro Caliche Project Development Report (“PDR”) and announced in a related news release date May 26, 2021, the current exploration program was designed to test an exploration target of between 75,000,000 to 100,000,000 tonnes with grades potentially between 0.3 g/t to 0.5 g/t AuEq. This is in addition to the estimated inferred resource of 11.5 million tonnes at an average grade of 0.495 g/t gold and 4.3 g/t as stated in the initial NI 43-101 Technical Report[1] filed in July 2019.

The reader is cautioned that the potential tonnages and grades in the PDR are conceptual in nature, as at the time of the report’s issue there had been insufficient exploration to define a mineral resource and it was uncertain if further drilling would result in the target being delineated as a mineral resource.

With a limited amount of the property’s mapped gold mineralized zones having been drilled and assayed to date, the upcoming drilling program will strategically target a 750-meter zone along the southern extensions of the El Colorado – La Ventana and Buena Suerte – San Quintin corridors where extensive surface samplings and geological mapping suggests the potential for material expansion of the oxide gold mineralization.

Mel Herdrick, Sonoro’s VP of Exploration noted, “The sampling and mapping program is producing important new data that, when added to Sonoro’s database, significantly assists our ability to locate drill targets and prioritize our drilling, which is anticipated to resume this fall.  Previous drilling intercepted gold mineralization in most holes, demonstrating a very good success rate, which I expect will continue in the mineralized zone corridors. I also expect that ongoing sampling at the higher ridge zones to the northeast will show a continuation of gold mineralization that has been previously defined, and as it does, it should lead to additions of mineralized material, especially at El Bellotoso, and El Desprecio, as well as La Española.”

Kenneth MacLeod, Sonoro’s President and CEO added, “The sampling data cited in this news release, together with the additional sampling awaiting assaying, will be instrumental in supplementing recommendations for future exploration to be outlined in the upcoming PEA, anticipated to be released in August. Sonoro is scheduling the next phase of drilling to commence this fall.”

John Darch Sonoro’s Chairman commented, “This sampling program and the highly encouraging results are one of the key components of management’s strategy to develop the conceptual heap leach mining operation and, if successful, to use the cash flow to fund our on-going drilling program and continue expanding already known gold resources and the proposed mine’s rate of production. Our efforts to date have tested barely 20% of the known mineralized zones and I look forward to reporting to our shareholders additional results from this program as well as our upcoming drilling program.”

Samples are collected as continuous chip samples by hand into plastic bags, GPS positions and rock descriptions noted, the bags are numbered using ALS-Chemex bar code number books, then sealed and taken to secure storage in Cucurpe village near the project.

Company personnel transport those bagged samples directly to the preparation laboratory of ALS- Chemex in Hermosillo, Sonora.  At the preparation laboratory samples are logged into ALS-Chemex system using bar code labels, opened, then reduced in size through crushing, splitting and pulverization.  About 200 grams of each sample are sent by ALS-Chemex to their Vancouver, Canada laboratory where samples are individually dissolved in aqua regia for multi-element ICP analysis, including silver. Thirty grams of each pulverized sample is split apart in that laboratory and undergoes a “Fire Assay” for gold content by reducing the fire assay to a concentrated button of material that is dissolved in acids and from the solution, the gold content is determined by atomic absorption. Quality control standards were inserted by the ALS-Chemex, Vancouver, B.C. laboratory.

Sonoro Gold Corp. is a publicly listed exploration and development company holding the near development stage Cerro Caliche project and the exploration stage San Marcial properties in Sonora State, Mexico. The Company has highly experienced operational and management teams with proven track records for the discovery and development of natural resource deposits.

Forward-Looking Statement Cautions: This press release contains certain “forward-looking statements” within the meaning of Canadian securities legislation, relating to, among other things, the Company’s plans for the exploration, development and operations at the above-described Cerro Caliche Concessions, located in the municipality of Cucurpe, Sonora, Mexico, including statements regarding the Company’s plans for additional exploration drilling, an anticipated update of the current resource estimate for Cerro Caliche to be included in a Micon International 43-101 technical report to be published in Q3 2021, a planned preliminary economic assessment (“PEA”) to be published in 2021 reporting on the viability of a proposed 15,000 tonne/day mining operation, and other material conditions set out above on which the Company’s development plans are dependent.  Although the Company believes that such statements are reasonable based on current circumstances, it can give no assurance that such expectations will prove to be correct.  Forward-looking statements are statements that are not historical facts; they are generally, but not always, identified by the words “expects”, “plans”, “anticipates”, “believes”, “intends”, “estimates”, “projects”, “aims”, “potential”, “goal”, “objective”, “prospective” and similar expressions, or that events or conditions “will”, “would”, “may”, “can”, “could” or “should” occur, or are those statements, which, by their nature, refer to future events.  The Company cautions that forward-looking statements are based on the beliefs, estimates and opinions of the Company’s management on the date the statements are made and they involve a number of risks and uncertainties, including the possibility of unfavorable exploration and test results, unfavorable results of the contemplated PEA of the Cerro Caliche project, the lack of sufficient future financing to carry out exploration and development plans and unanticipated changes in the legal, regulatory and permitting requirements for the Company’s exploration programs.  There can be no assurance that such statements will prove to be accurate, as actual results and future events could differ materially from those anticipated in such statements.  Accordingly, readers should not place undue reliance on forward-looking statements.  The Company disclaims any intention or obligation to update or revise any forward-looking statements, whether as a result of new information, future events or otherwise, except as required by law or the policies of the TSX Venture Exchange.  Readers are encouraged to review the Company’s complete public disclosure record on SEDAR at www.sedar.com.

SONORO ANNOUNCES POSITIVE PEA RESULTS AND UPDATED MINERAL RESOURCE ESTIMATE FOR THE CERRO CALICHE GOLD PROJECT WHICH DEMONSTRATES A PRE-TAX NPV OF US$68.7 MILLION AND AN IRR OF 52.7%