VANCOUVER, Canada, March 1, 2022 – Sonoro Gold Corp. (TSXV: SGO | OTCQB: SMOFF | FRA: 23SP) (“Sonoro” or the “Company”) is pleased to report the initial assay results from the first 24 drill holes of a 10,000-meter drilling campaign currently underway  at its Cerro Caliche gold project in Sonora, Mexico. The objective of the program is to increase the estimated size and grade of the project’s oxide gold mineralization as well as to establish a basis for an extension of the estimated life of the proposed heap leach mining operation as outlined in the Preliminary Economic Assessment and updated Mineral Resource Estimate filed under the Company’s profile on SEDAR on October 29, 2021 (the “Mineral Resource Estimate”).

The results include drilling conducted in the gold mineralized zones of El Colorado and Guadalupe, located in the southwestern region of the property, where assays returned multiple higher-grade gold intercepts within larger intervals of high-grade gold mineralization. Drilling is continuing at both zones.

Mel Herdrick, Sonoro’s VP of Exploration commented, “These results indicate that we are successfully extending gold mineralization at Cerro Caliche while simultaneously demonstrating the potential for higher-grade mineralized zones deeper in the system.”

John Darch, Sonoro’s Chairman noted, “We are very pleased with these drilling results. The shallow high-grade drill intercepts and higher-grade gold intercepts at depth suggest the potential to increase both size and grade of the project’s resource, which, if confirmed, may not only extend the life of the proposed heap leach mine, but also may improve the overall economics of the project.”

Kenneth MacLeod, Sonoro’s CEO and President added, “These positive assay results support our decision to continue drilling while moving forward with the proposed development of an open pit mining operation. Confirmation of higher-grade intercepts at depth may suggest the possibility for underground gold mineralization. Further geological data is required, but we are very encouraged by these initial results.” 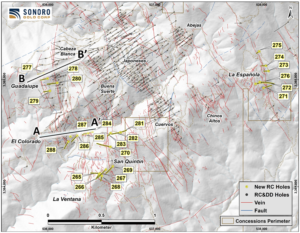 When combined with prior drilling results, the current Infill and expansion drilling at the higher-grade El Colorado gold mineralized zone, reveal the presence of blind (lack of surface exposure) irregular higher-grade, low angle vein occurrences.  These occurrences range from 10 to 70 meters below the present surface and may be included in future open pit cone determinations.

The high-grade SCR-286 intercept consists of vein and mega stock work located approximately 120 vertical meters lower than the resource pit cone used to calculate the zone’s gold resource in the updated Mineral Resource Estimate. The intercept begins underneath a gulley 80 meters immediately southeast of the pit cone proposed for the north slope of the gulley, and approximately 75 meters below surface with the mineralization continuing southeast under the south slope of the gully. Mineralization at El Colorado remains open to the northwest, the southeast and to depth. 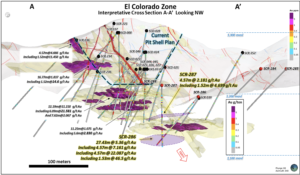 The higher-grade zone’s repetitive character likely is due to a higher degree of shearing at the footwall of the Guadalupe vein structure. The footwall shows stronger shear character including mylonitic vein textures locally. As the zones have a horizontal character (with some low angle dips), a reverse faulting episode generated the necessary open space to permit near horizontal quartz veins to be deposited early in mineralization with later gold deposition. The possibility of these types of veins forming in other parts of the property is being reviewed but the entire structural zone around the Guadalupe vein structure may be permissive over more than 100 meters width.

Guadalupe was excluded from the updated Mineral Resource Estimate due to its lack of sufficient drilling density. The zone is located parallel to the west side of Cabeza Blanca. Some parts of the Guadalupe zone may be included with the Cabeza Blanca resource in future estimations. 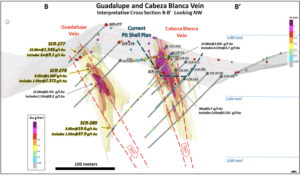 Drilling with programed inclined RC drill holes is focused on extending gold mineralization south of the existing mineralized zones where near surface extension drilling is focused on adding to the existing resource areas.  Access into the newly extended corridor had been limited until recently constructed roads enabled the Company to undertake an extensive sampling and mapping program, providing higher-grade targets for the current drilling program.

The geology in the newly drilled southern extension is similar to the geology of known mineralized zones to the north.  Higher-grade sampled vein zones extend along similar trends from the north into the extended corridor area, with the drill holes stepping out about 400 meters south.  Host rock is a complex of dioritic to granodiorite intrusive with later crosscutting andesitic dikes, similar to host rock in the El Colorado gold mineralized area.

Another area excluded from the Mineral Resource Estimate was La Española, located in the southeast region of the property. Six scout drill holes completed at La Española suggest lower grade mineralization in the northward extension of the vein zone. SCR-276 intercepted 4.58 meters averaging 0.77 g/t Au including 1.53 meters averaging 1.89 g/t Au.  This new data will be assessed in conjunction with the data from the prior drill holes to determine the potential for the zone.

Drilling continues to advance at Cerro Caliche with 30 drill holes completed to date. COVID related delays in the completion of laboratory analyses have created significant sample backlogs and delayed the announcements of drilling results. To expedite material information to shareholders, four of the drill holes listed below include only gold assays while silver assay results are pending. Full assay results from the four drill holes will be available on the Company’s website once received.

The following table provides the assay results for the complete list of reported drill holes: 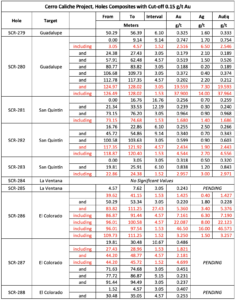 Bureau Veritas (BV) collects from the drill site the samples and transports them directly to the preparation laboratory in Hermosillo, Sonora.  At the prep. laboratory, a split part of each sample (about 500 grams) is reduced through crushing, splitting and pulverization.  Thirty grams of each pulverized sample is split apart in the Hermosillo laboratory and undergoes a “Fire Assay” for gold content by reducing the fire assay to a concentrated button of material that is dissolved in acids and the gold content determined by atomic absorption.  About another 200 grams of each sample are sent by BV to their Vancouver, Canada laboratory and dissolved there in aqua regia for multi-element ICP analysis, including silver.

ALS-Chemex collects the samples and transports them directly to the preparation laboratory in Hermosillo, Sonora. At the laboratory, part of each sample is reduced through crushing, splitting and pulverization from which 200 grams is sent to the ALS-Chemex assay laboratory in Vancouver.  Thirty grams undergoes fire assay for gold with the resulting concentrated button of material produced is dissolved in acids and the gold is determined by atomic absorption.  Another quantity of the sample is dissolved in four acids for an ICP multi-element analysis.

No QA/QC issues were noted with the results received from either laboratory.