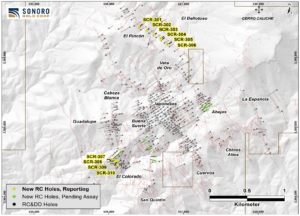 The drilling campaign at Cerro Caliche is now complete with final assays expected to be announced in June.  New geological data from over 7,200 meters and 63 drill holes will be included in a further updated resource estimate scheduled to be released in the fall of 2022. The updated technical report will also assess the potential economic impact of the new drilling data on the proposed heap leach mining operation.

Mel Herdrick, Sonoro’s VP Exploration, commented, “We continue to report good gold bearing intervals of mineralization as well as higher-grades intercepts that continue to add to potential mineralized material. Results from another 15 drill holes are still pending and we are working to determine the structural controls of the new higher-grade zones.”

Kenneth MacLeod, Sonoro’s President and CEO, commented, “Our continued success with demonstrating high-grade intercepts at the Colorado zone suggests the potential for an increase in both the grade and size of the gold resource at El Colorado. Additional success at the Rincon zone through infill drilling has also achieved our objective of identifying continuous mineralization between two pit shells located 400 meters apart, suggesting the potential for coalescing the pit shells into one larger pit shell.”

John Darch, Sonoro’s Chairman, noted, “The expansion of the El Colorado and El Rincón gold mineralized zones, along with the multiple higher-grade intercepts we have announced during the Phase IV drilling program, adds to our optimism that this new geological data may potentially increase both the size and gold grade of the resource. If confirmed, an expanded resource may also improve the project’s potential economics and extend the mine life of the proposed mining operation.”

Continued expansion of El Colorado was confirmed with four drill holes completed along the western side of the zone.  The shallow, high-grade intercepts of drill hole SCR-307 returned 9.14 meters averaging 9.577 grams of gold per tonne (“g/t Au”) including 6.09 meters averaging 14.167 g/t Au and 1.52 meters averaging 38.3 g/t Au. SCR-307 does not correlate with any known projected vein and may be part of a series of high-grade ore shoots connected to deeper high-grade occurrences in the footwall of the Guadalupe vein structure, believed to be a continuation of El Colorado vein system as discussed in the Company’s News Release dated March 1, 2022.

The Company is also investigating a possible physical connection of SCR-307 to SCR-036 which, as previously announced, intercepted 1.52 meters averaging 11.45 g/t Au. These structures which appear near horizontal in attitude, contain higher gold grades with low silver levels and lead levels exceeding one percent.  It is believed that the ore shoots are a repeating series of veins developed in a reverse fault episode which opened horizontal structures in the footwall of the Guadalupe Vein zone allowing higher-grade fluids to deposit gold and lead.  Assay results from five holes at El Colorado are pending.

The geology of the El Colorado mineralized zone is complex with a mixture of silicified meta-sedimentary units intruded by a silicified and argillic altered quartz porphyry igneous body and, in deeper parts, granodiorite with dioritic to andesitic dikes. The mineralized structures trending north 10° west and dipping northeasterly cross the zone extending southerly from the Cabeza Blanca quartz veins. As many as five high-grade ore shoots intersect the Guadalupe footwall and the zone contains numerous additional veins and veinlets that are situated apart from the above-described vein zones. 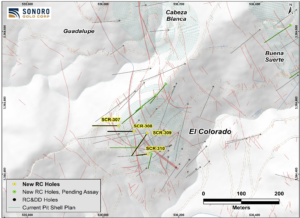 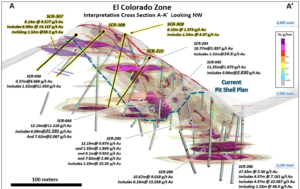 Approximately two kilometers north of El Colorado, six drill holes were completed along the northwest trending El Rincón structure between two separate pit shells used to calculate the September 2021 mineral resource estimate. These pit shells are approximately 400 meters apart with continuation of mineralization between the pit shells confirmed by a total of 16 drill holes, over approximately one kilometer of strike length. Drill holes SCR-301 through SCR-306 were infill drilling completed during the current program.

The structure’s trend is azimuth 310° with dip of 85° northwest to vertical.  This vein structure cuts both rhyolitic dikes and sills and bedded meta-sedimentary rocks with gold silver mineralization occurring in both rock types. The El Rincón vein zones are generally parallel to, or along, the rhyolite dike margins. 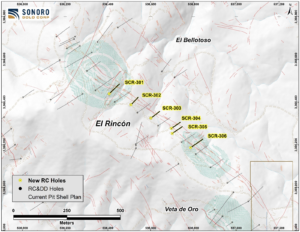 The following table provides the assay results for the complete list of reported drill holes: 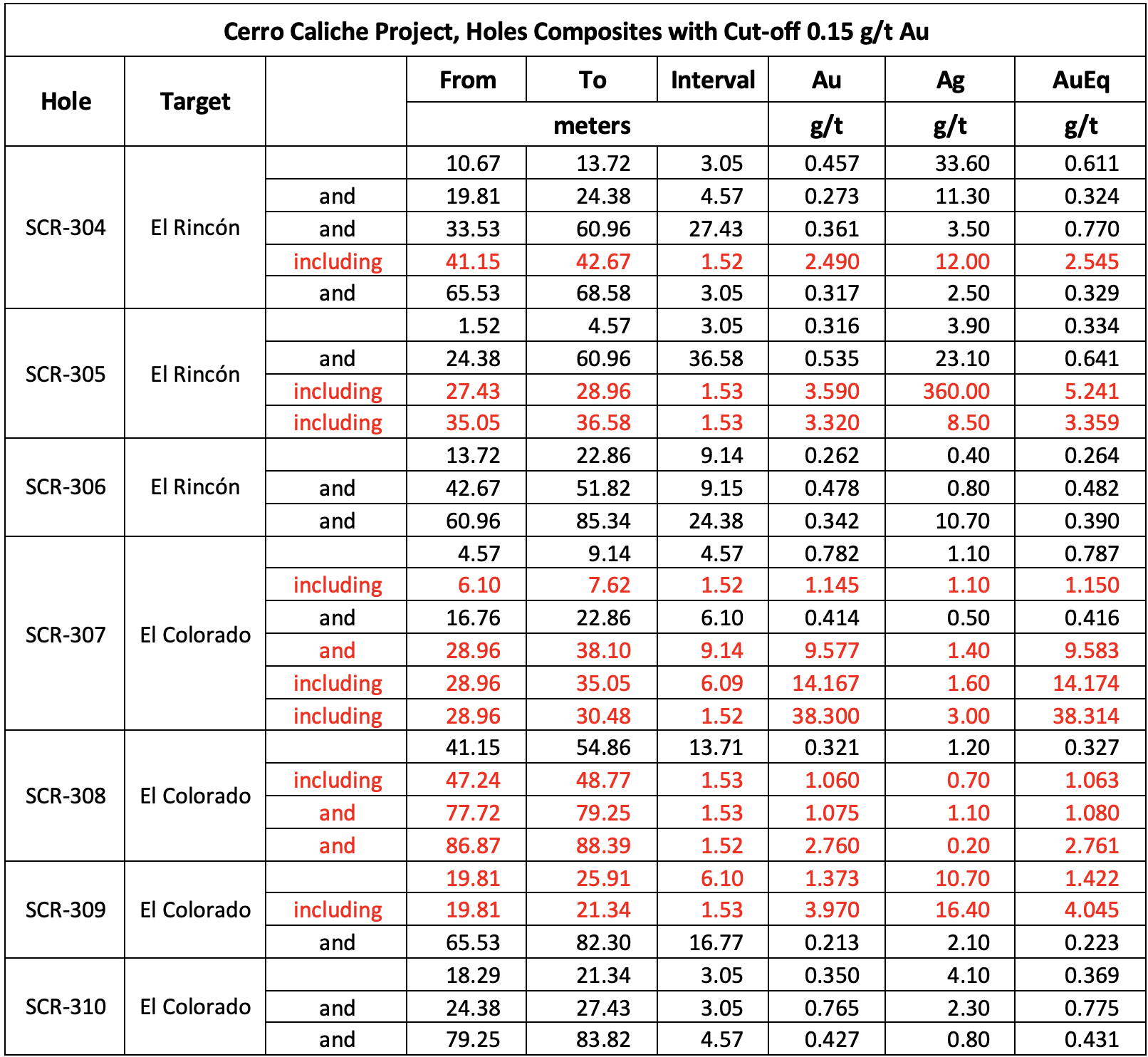 ALS-Chemex collects the samples and transports them directly to the preparation laboratory in Hermosillo, Sonora. At the laboratory, part of each sample is reduced through crushing, splitting and pulverization from which 200 grams is sent to the ALS-Chemex assay laboratory in Vancouver. Thirty grams undergoes fire assay for gold with the resulting concentrated button of material produced is dissolved in acids and the gold is determined by atomic absorption. Another quantity of the sample is dissolved in four acids for an ICP multi-element analysis.