The objective of the program was to increase the estimated size and grade of the project’s oxide gold mineralization, as well as to extend the estimated life of a proposed heap leach mining operation as outlined in the Preliminary Economic Assessment (“PEA”) and updated Mineral Resource Estimate filed under the Company’s profile on SEDAR on October 29, 2021.

On May 9, 2022, the Company announced positive results of an updated PEA based on an optimized mine plan to potentially increase the project’s previously reported economic parameters. The updated report was based on the same mineral resource estimate contained in the Company’s initial PEA and did not include the new geological data from the Phase IV campaign.

Drilling results from the now completed Phase IV campaign will be included in an updated resource estimation scheduled to be announced in the fall of 2022. The economic impact of the updated resource on the proposed heap leach mining operation is also to be assessed and will be contemplated in a further technical report.

Mel Herdrick, Sonoro’s VP Exploration, commented, “Phase four has been a successful drilling campaign with continued reporting of mineralized extensions and higher-grade intercepts. As the project continues to move through the current permitting phase, the objective of the exploration team now is to refine our understanding of the new extensions and higher-grade zones, as well as the potential impact of the new drilling data on the project’s resource.”

Kenneth MacLeod, Sonoro’s President and CEO, added, “The completion of the drilling program is another important milestone in the development of Cerro Caliche. Last month we announced the positive results of an updated PEA and are currently assessing the potential economic impact of the new drilling data on the proposed heap leach mining operation. An updated resource estimation is expected to be filed this fall and we will continue to work on securing project financing and moving the project forward.”

John Darch, Sonoro’s Chairman, noted, “With regards to the successful completion of the drilling program, the Board would like to specifically commend the efforts of our exploration team in Mexico, most notably VP of Exploration Mel Herdrick, VP of Operations Jorge Diaz and Chief Geologist Oscar Gonzalez. These individuals have been instrumental in the success of Cerro Caliche’s exploration and development programs.”

The results announced in this news release reflect drilling activity conducted at the Abejas gold mineralized zone located at the eastern perimeter of the Central Pit Zone, with the reported intercepts situated outside of the pit shell used to calculate the mineral resource estimate in the initial PEA. 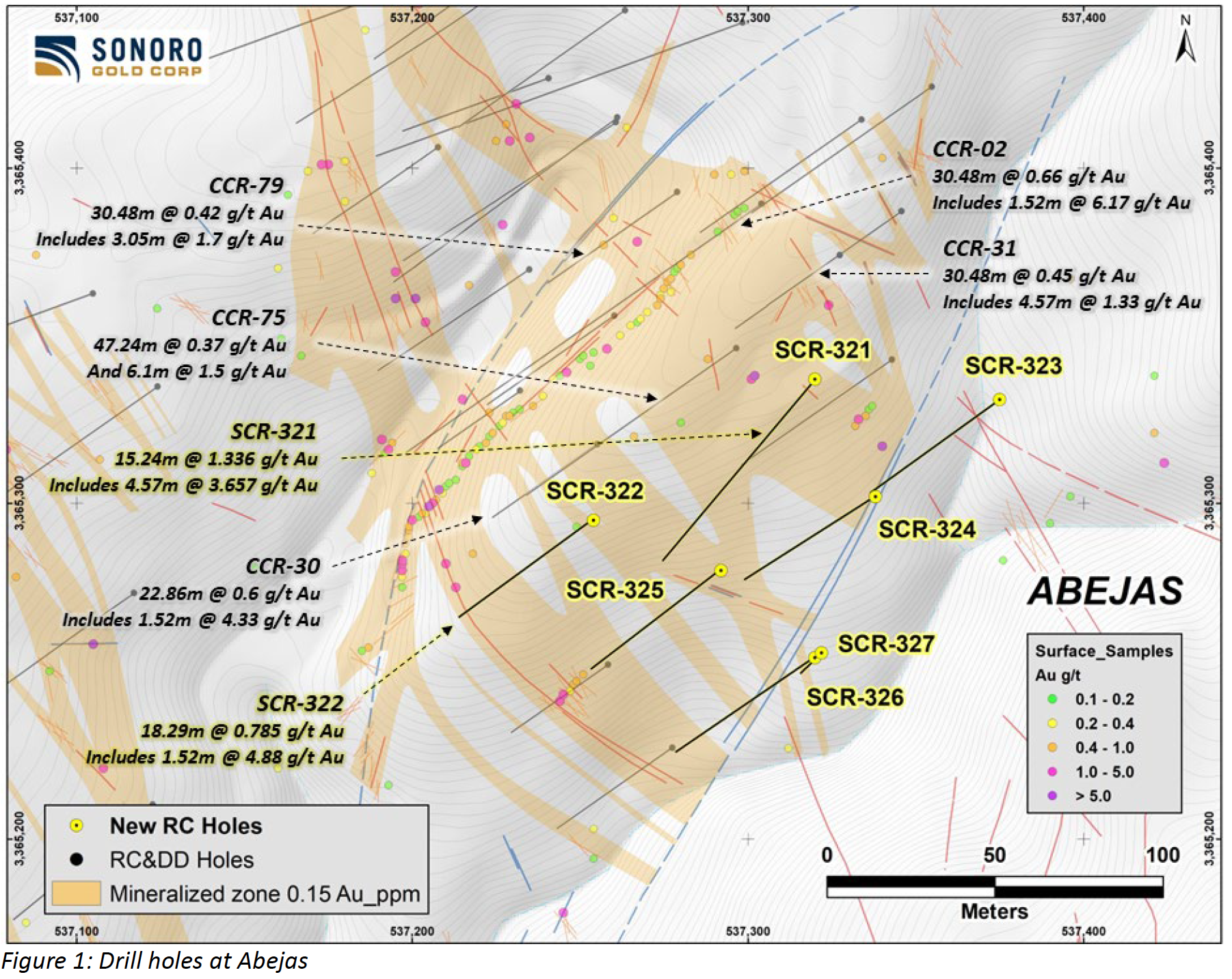 The Abejas extension is terminated by a northeasterly trending fault that continues southwesterly to offset the Los Cuervos mineralization.  Further detailed work around the faulted Abejas zone could determine the same relationship with possible additional targets.

Both drill holes SCR-321 and SCR-322 correlate with other plotted vein projections intersected further north and the geology of the Abejas zone is similar to the Japoneses gold mineralized zone with most rock drilled being Jurassic-Cretaceous metasedimentary quartzite, shale and local limestone beds.  Structures with quartz vein fillings cross with the normal northwest orientation and are part of the wider zone of sheeted gold mineralized veins.

The Abejas zone is about 600 meters long and is traced further northwesterly to join the Veta del Oro zone which has a long, well-defined vein zone with higher gold and silver grades. Anomalous silver content is also present in the results with 24.9 grams per tonne intercepted in drill-hole SCR-321 between depths of 9.14 and 10.67 meters.  Lead is also anomalous with gold but in broader anomalies. Silicification is common in the area, especially close to the vein zones.

The table below provides the assay results for the complete list of reported drill holes.  Vein intersections appear to be near true widths reported from assay intervals. Drill holes cross the veins with 45-degree inclination, while veins appear to have dips around 50 to 60 degrees. 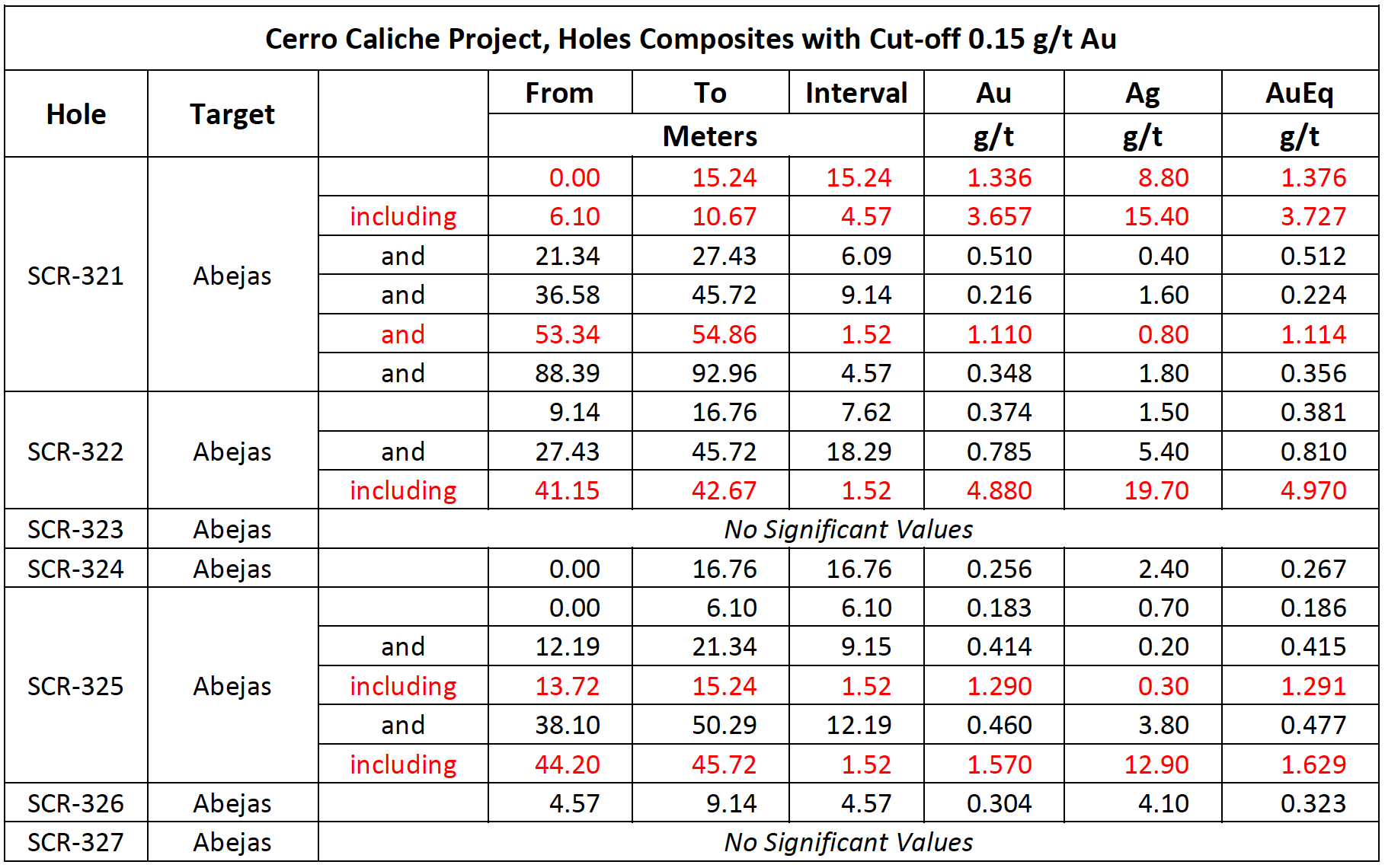 The Phase IV drilling program was designed to potentially expand known mineralized zones, including zones excluded from the mineral resource estimate due to lack of required drilling density. The program also drilled potential higher-grade targets identified by a surface sampling program completed in the summer of 2021.

The map below illustrates the location of drill holes completed during the Phase IV drilling program. 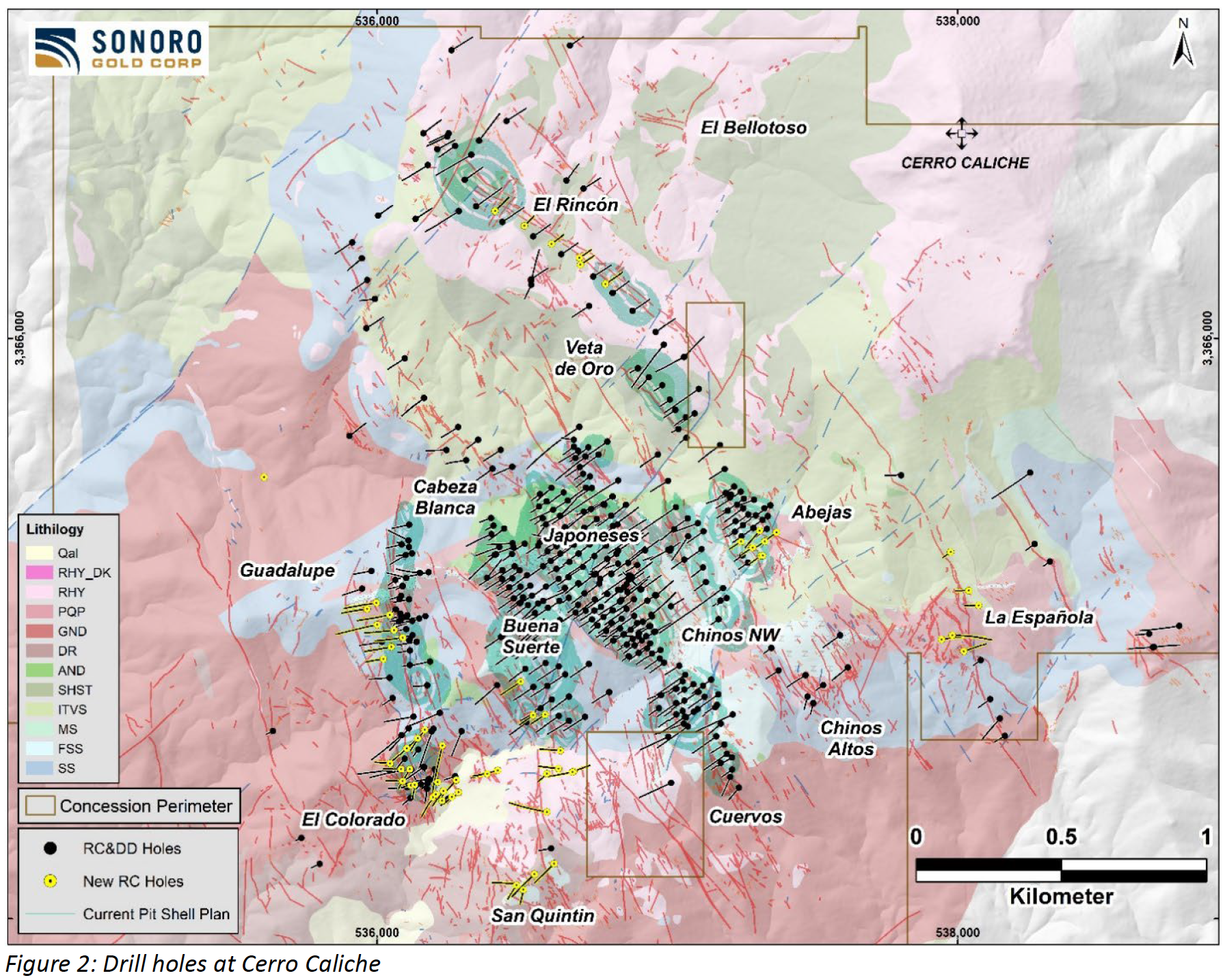 Drilling completed at El Colorado provided the Company with an improved structural understanding of the complexity of the mineralized zone, including higher-grade blind (lack of surface exposure) structures or shoots.  While the zone is complexly faulted and veined, the additional drill holes completed during the Phase IV program began to reveal coherent high-grade gold bearing veins, as well as anastomosing veins diverging and branching from zone’s main veins.

Collectively, these suggest an increased potential for a higher-grade open pit which, if confirmed, may also potentially increase the average gold content of the entire mineralized zone. 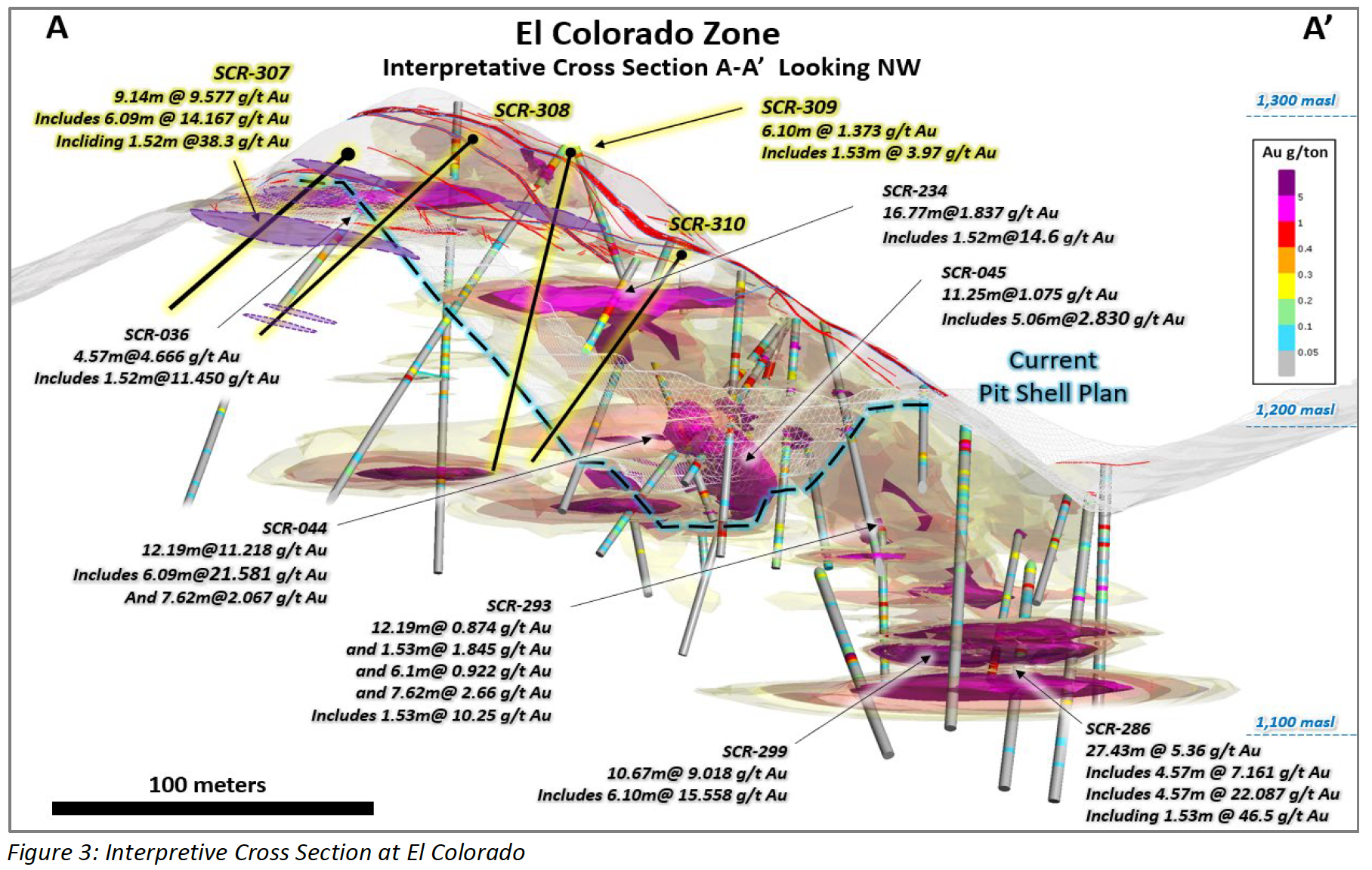 Oxidized mineralized material is present throughout El Colorado with no significant sulfide minerals present.  The geology is a mixture of silicified meta-sedimentary units intruded by a silicified and argillic altered quartz porphyry igneous body and, in deeper parts, granodiorite with dioritic to andesitic dikes.  The mineralized structures trending north 10° west and dipping northeasterly cross the zone extending southerly from the Cabeza Blanca quartz veins.

Located to the north of El Colorado, and parallel to the Cabeza Blanca mineralized gold zone, Guadalupe was excluded from the updated mineral resource estimate due to its lack of sufficient drilling density.

Drilling completed at Guadalupe during Phase IV returned intercepts of higher-grade gold vein material at depth, including previously announced drill hole SCR-280 which intercepted 3.05 meters averaging 19.56 g/t Au, including 1.53 meters averaging 37.90 g/t Au. The higher-grade zone’s repetitive character likely is due to a higher degree of shearing at the footwall of the Guadalupe vein structure. 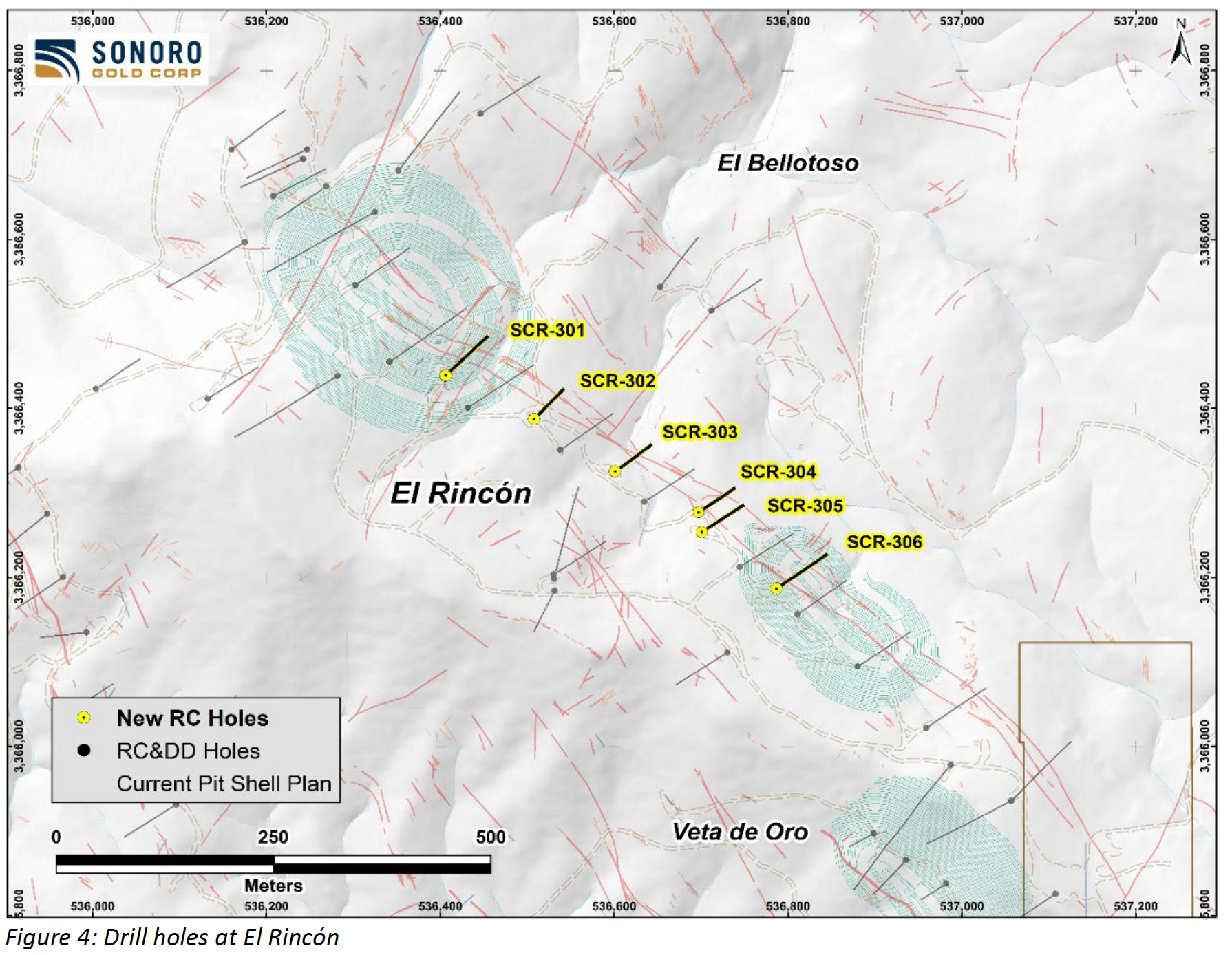 The footwall shows stronger shear character, including mylonitic vein textures locally, and suggests the potential for development and further exploration in areas to the west where numerous veins are present.  Guadalupe’s entire structural zone may be permissive over more than 100 meters width.

Buena Suerte is approximately 300 meters east of El Colorado and drilling completed during Phase IV extended the Buena Suerte vein system to the southwest and potentially increased the zone’s estimated resource.  Mineralization was shown to extend further south another 500 meters, but additional drilling is required to follow the vein zones located beneath a cover of thick soils and colluvium.

Much of the gold and higher-grade silver is dispersed well into the dike. The structure’s trend is azimuth 310° with dip of 85° northwest to vertical.  This vein structure cuts both rhyolitic dikes and sills and bedded meta-sedimentary rocks with gold-silver mineralization occurring in both rock types. The El Rincón vein zones are generally parallel to, or along, the rhyolite dike margins.

Another area excluded from the Mineral Resource Estimate was La Española, located in the southeast region of the property.  Southeast of El Rincón, the mineralization of La Española is also localized in rhyolitic dike.  Six scout drill holes completed during Phase IV suggest lower grade mineralization in the northward extension of the vein zone.

To date, the Company has completed over 41,800 meters of drilling at Cerro Caliche and, with the inclusion of data from prior operators, accumulated a database of almost 55,000 meters of geological data on the project, including multiple high-grade gold intercepts as well as broad zones of stockwork and disseminated material.  Geological data from the Phase IV drilling campaign will be included in an updated resource estimate scheduled to be filed in fall 2022.

ALS-Chemex collects the samples and transports them directly to the preparation laboratory in Hermosillo, Sonora.  At the laboratory, part of each sample is reduced through crushing, splitting and pulverization from which 200 grams is sent to the ALS-Chemex assay laboratory in Vancouver.  Thirty grams undergoes fire assay for gold with the resulting concentrated button of material produced is dissolved in acids and the gold is determined by atomic absorption.  Another quantity of the sample is dissolved in four acids for an ICP multi-element analysis.

Sonoro Gold Corp. is a publicly listed exploration and development Company holding the near-development-stage Cerro Caliche project and the exploration-stage San Marcial project in Sonora State, Mexico.  The Company has highly experienced operational and management teams with proven track records for the discovery and development of natural resource deposits.