VANCOUVER, Canada, June 1, 2021 – Sonoro Gold Corp. (TSXV: SGO | OTCQB: SMOFF | FRA: 23SP) (“Sonoro” or the “Company”) is pleased to report assay results from the final nine RC drill holes, completing Phase Three of its drilling program at the Cerro Caliche gold project, located in Sonora State, Mexico.  As noted in news releases, dated April 5, 2021, and April 26, 2021, the Company extended drilling activities to investigate the potential merging of the Japoneses and Buena Suerte zones into a single body of shallow, oxide gold mineralization. Recent results indicate a coalescence of the two zones over a minimum length of 400 meters which may prove to have significant and positive economic implications for the Company’s proposed Heap Leach Mining Operation (HLMO).

The following map shows the location of the nine RC drill holes as well as the merging of the northern extents of the Japoneses and Buena Suerte zones. 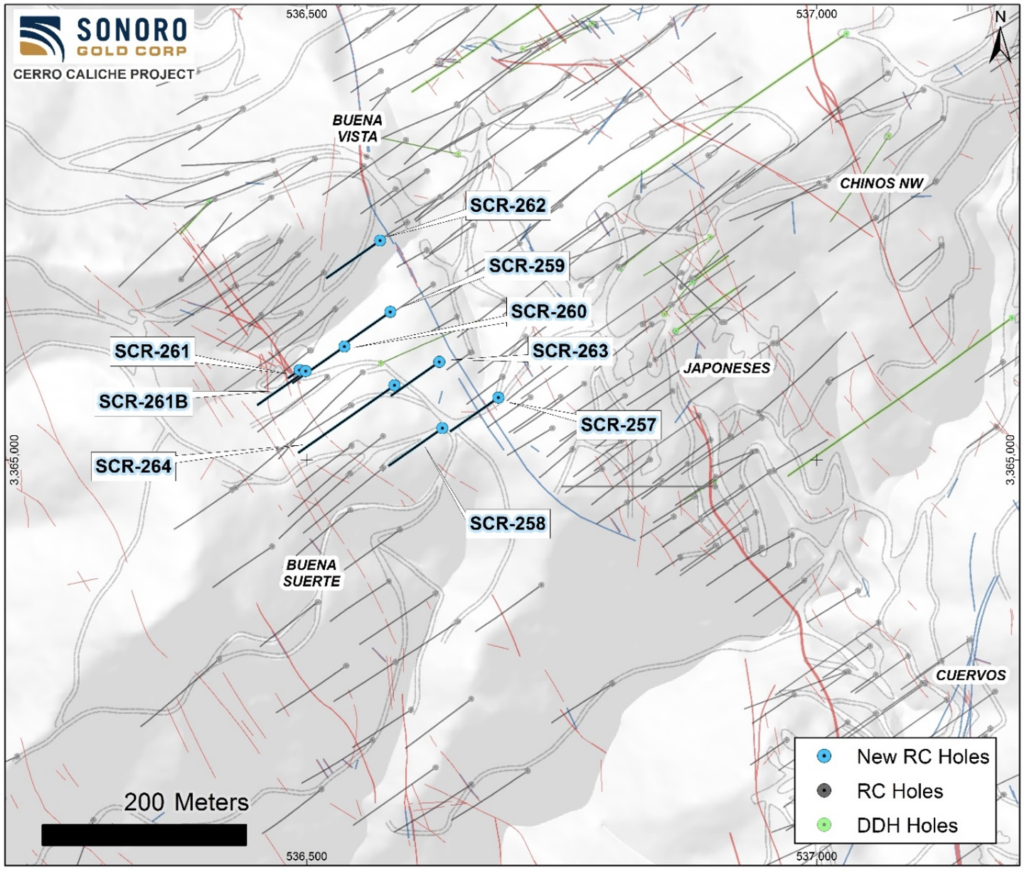 Two independent NI 43-101 technical reports, scheduled to be filed in July 2021, will provide valuable information as to whether the identified mineralization is sufficient to support a proposed HLMO with an initial operating capacity of up to 15,000 tons per day (tpd). As previously announced, the Company engaged D.E.N.M. Engineering Ltd. to prepare a Preliminary Economic Assessment (PEA) and Micon International Ltd. to prepare a mineral resource estimate. The mineral resource estimate will include all prior and current exploration data up to April 2021. To date, the Company has drilled and assayed results from over 34,500 meters of drilling, including over 25,000 meters of new drilling since September 2020. When combined with historical data, total exploration at Cerro Caliche totals over 47,500 meters, 433 drill holes and 9,365 surface samples.

Drilling activities on the concession are currently paused to provide the exploration team time to ensure all data and assistance is available to the independent consultants, and to implement any recommendations set forth in the anticipated technical reports. Subject to the terms of project financing, drilling is scheduled to resume by the end of the third quarter of 2021 to continue expanding mineralization and investigating potential high-grade targets.

The final nine drill holes were completed along the narrowing gap between the northwest extension of the Japoneses zone, known as the Buena Vista fault vein zone, and the east flank of the Buena Suerte zone. Four of the drill holes cut the east side of Buena Suerte with drill hole SCR-264 intercepting 15.24 meters averaging 0.764 grams of gold per tonne (“g/t Au”), including 1.52 meters averaging 2.402 g/t Au. Drill hole SCR-261 encountered continuous mineralization from surface but intercepted an artisanal mine working at 19.81 meters. The rig was moved 6 meters and the hole was re-drilled as SCR-261B, which intercepted a total of 35 meters of gold mineralization, including 1.5 meters averaging 1.23 g/t Au.

These final drilling results mark the conclusion of a highly successful and intense drilling program. As noted above, management expects two independent 43-101 compliant reports to update the resource size and classification and determine whether it is sufficient to support the Company’s proposed HLMO with a conceptual operation of up to 15,000 tpd.

Mel Herdrick, Sonoro’s VP of Exploration noted, “I am pleased that these latest drill holes show the area between the two gold bearing zones, which was previously considered barren, does in fact carry gold mineralization.  It is a very encouraging ending for what has been a very effective drill program.  There remains much more potential in the areas we plan to drill later this year and next and I expect that this drilling will continue to define and materially expand and categorize the project’s oxide gold mineralization.” 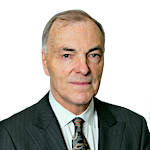 Kenneth MacLeod, Sonoro’s President and CEO added, “We have reached a watershed juncture in the development of Sonoro, as we are now making the transition from an exploration company to our aspirational goal of becoming a gold producer in early 2022. We are grateful for the support of our shareholders over the past three years as we strive to make Cerro Caliche the next mining success story in Mexico.”

John Darch Sonoro’s Chairman commented, “These final drill results reinforce the potential for the Japoneses-Buena Vista and Buena Suerte zones to be assessed as a single pit with all of the attendant cost savings that a single pit may make possible.  They also mark the conclusion of an exceptional year, where Sonoro has been transformed from an exploration junior to a development stage company with a goal of achieving production early next year. Our strategy of exploring and developing Cerro Caliche’s extensive shallow oxide gold mineralization while advancing towards becoming a gold producer is advancing as we had hoped.  We anticipate this will be confirmed with the filing of the Micon International’s 43-101 technical report on an updated resource estimate, as well as with the filling of the anticipated PEA regarding the proposed project’s economics.” 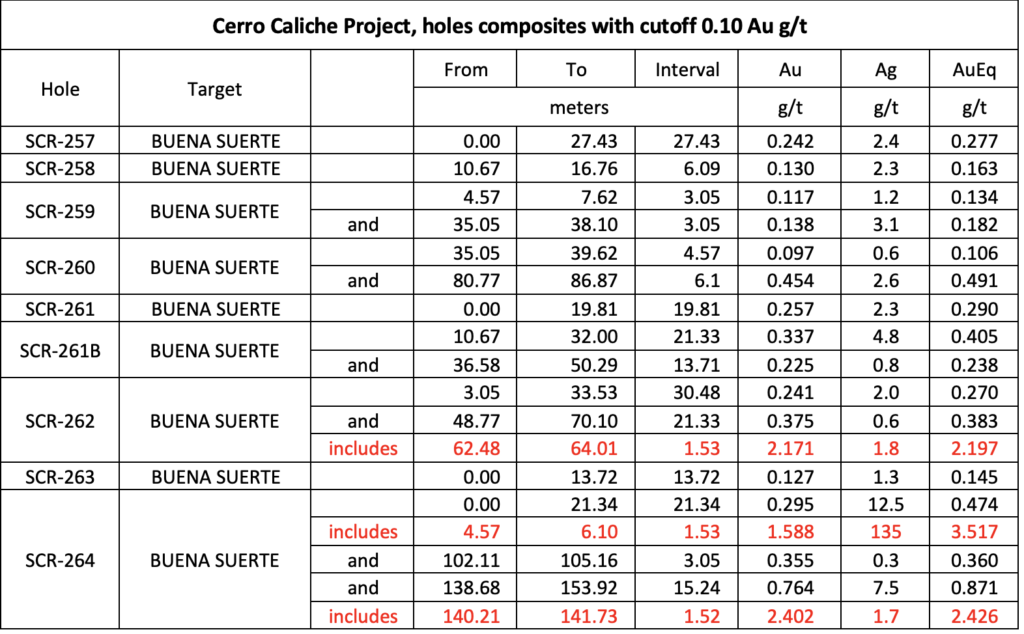 All reported intervals in this news report are 45-degree inclined drill holes cutting an assumed 60–90-degree dipping vein zone toward the drill hole, thus the intercept is considered to be approximately 20 degrees or less from having a perpendicular intersection.  The true widths of reported drill widths are anticipated to be about 75 percent or more of intercept widths reported.

The above table illustrates the exploration history of the Cerro Caliche concession. Sonoro commenced drilling in October 2018 and completed the first two phases by June 2019 for a total of 96 drill holes totaling 10,328 meters. The Company initiated Phase 3 drilling in August 2020 and completed the program in April 2021. During Phase three, Sonoro completed 170 RC drill holes (18,206.57 meters) and 48 diamond drill core holes including 11 metallurgical PQ drill holes (6,014.9 meters) for a Phase 3 total of 24,221.47 meters of drilling. Total Sonoro drilling amounts to 34,549.63 meters in 314 drill holes.  The earlier Corex and Paget drilling of 104 drill holes over 10,762.67 meters, brings the drilling database to a total of 45,312.3 meters over 418 drill holes. Additionally, the data from earlier drilling by Cambior totaling 2,244.85 meters over 15 holes is appended to the Sonoro database.

Bureau Veritas (BV) collects the samples from the drill site and transports them directly to the preparation laboratory in Hermosillo, Sonora.  At the preparation laboratory, a split part of each sample (about 500 grams) is reduced through crushing, splitting and pulverization. Thirty grams of each pulverized sample is split apart in the Hermosillo laboratory and undergoes a “Fire Assay” for gold content by reducing the fire assay to a concentrated button of material that is dissolved in acids and the gold content determined by atomic absorption.  About another 200 grams of each sample are sent by BV to their Vancouver, Canada laboratory and dissolved in aqua regia for multi-element ICP analysis, including silver.