VANCOUVER, Canada, October 25, 2021 – Sonoro Gold Corp. (TSXV: SGO | OTCQB: SMOFF | FRA: 23SP) (“Sonoro” or the “Company”) is pleased to announce the intention to resume drilling at the Company’s Cerro Caliche gold project in Sonora State, Mexico.  The 10,000-meter reverse circulation drilling campaign will proceed alongside the proposed development of a heap leach mining operation (HLMO) with a projected capacity of up to 15,000 tonnes per day.

The six-month drilling program will focus on expanding the project’s oxide gold mineralization included in the updated Resource Estimate announced September 15, 2021, as well as potential higher-grade targets recently identified by a surface sampling program announced on August 30, 2021, and July 20, 2021.

The map below shows the proposed drill holes for the upcoming program: 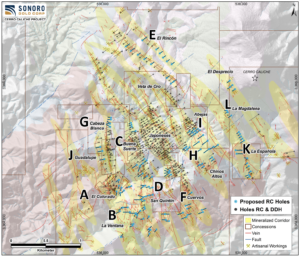 The reader is cautioned that drill locations may change as drilling and sampling results may impact drilling sequence, location and priority.

The Company plans 705 meters of infill and expansion drilling at El Colorado (A) where previous drilling by the Company returned higher-grade results including drill-hole SCR-044 which intercepted 12.19 meters averaging 11.2 grams of gold per tonne (“g/t Au”) including 6.1 meters averaging 21.58 g/t Au.  A further 1,230 meters of drilling is planned along the El Colorado/La Ventana Corridor (B) where assay results from surface sampling announced on July 20, 2021, confirmed linear structural corridors of anomalous gold, silver, and base metal mineralization with a 600-meter extension to the southeast from El Colorado to La Ventana. Additional sampling results announced on August 30, 2021, identified three oxide gold mineralized “windows” within the El Colorado/La Ventana Corridor with assay results from 39 samples averaging 0.63 g/t Au and results from 51 samples averaging 0.76 g/t Au. Another seven samples returned grades between 4.4 g/t Au and 9.9 g/t Au.

To the east of El Colorado at the Buena Suerte mineralized zone, the Company plans 1,215 meters of infill and extension drilling at the north and south ends of Buena Suerte (C). An additional 1,800-meters of drilling is targeted along the Buena Suerte/San Quintín Corridor (D) to the south of Buena Suerte. Surface sampling confirmed a 750-meter southern extension of the Buena Suerte/San Quintin Corridor where two windows of oxide gold mineralization were identified also suggesting the potential for higher-grade and near surface mineralization. Previously announced assay results from 61 samples averaged 0.65 g/t Au and another 11 samples returned grades between 2.5 and 14.5 g/t Au.

Another 1,110-meters of expansion drilling is planned at El Rincón (E) to connect with the northwest extension of the Veta de Oro gold mineralized zone located over 500 meters to the southeast along the same structure. An additional 1,290-meters of drilling is planned at Cuervos (F), located at the southernmost extension of the Japoneses mineralized zones to expand the Cuervos zone toward the northwest and to the south and southwest. Drilling is planned to extend the Cabeza Blanca (G) vein zone to the north as well as at the Abejas/Chinos Altos Corridor (H) where the Company plans to investigate the horse tailed bifurcation of the Abejas (I) vein zone with four vein splays to the southwest into Chinos Altos where reported drill hole SCR-069 intercepted 7.632 meters averaging 0.947 g/t Au.

Drilling will also focus on extending mineralization at two zones excluded from the updated resource estimate due to lack of required drilling density. The first is the Guadalupe zone (J), located parallel to the west side of Cabeza Blanca where reported results included drill hole SCR-030 which intercepted 22.86 metres averaging 0.725 g/t Au and drill hole SCR-061 which intercepted 15.2 meters averaging 0.599 g/t Au. The Company plans 300 meters of infill drilling to investigate the potential for the Guadalupe zone to coalesce with the Cabeza Blanca open pit.

The second excluded zone is La Española (K), located in the southeast region of the concession. Reported results from La Española included drill hole SCR-068 which intercepted 9.14 m of 1.25 g/t Au and surface sampling which identified the area as being within the recently defined La Magdalena/La Española Corridor. The Company plans to drill approximately 1,800 meters at La Española and another 190-meters at La Magdalena (L).

Mel Herdrick, Sonoro’s VP of Exploration noted, “We will initiate this program armed with  important new data that will allow us to potentially add to our resource and target areas where sampling indicates the potential for higher-grade mineralization. Previous drilling intercepted gold mineralization in most holes, demonstrating a very good success rate, which I expect will continue based on the sampling and drill results.”

Sonoro’s President and CEO, Kenneth MacLeod, commented, “This program has been under development since we paused drilling in May 2021. It is strategically designed to expand the project’s mineralized zones and target potentially higher-grade, near surface mineralization. We maintain our strategy to expedite the commencement of operations to generate cashflow that will contribute to further drilling to increase the project’s potential.”

Sonoro’s Chairman, John Darch, added, “The drilling campaign will focus on potentially increasing the size and grade of the gold resource while we continue with the proposed development of the HLMO. Confirmation of extensive, higher-grade mineralization could potentially improve the overall economics of the project.”

The table below includes the number of high priority drill holes and meters allocated to each zone, with the targeted 10,000 meters to be selected from the list. The locations, sequencing and configuration of the holes may be modified as assay results are received. Drill hole lengths are designed for an average length of 100 – 110 meters within a range of 70 to 140 meters per hole.

Sonoro Gold Corp. is a publicly listed exploration and development company holding the near development stage Cerro Caliche project and the exploration stage San Marcial properties in Sonora State, Mexico. The Company has highly experienced operational and management teams with proven track records for the discovery and development of natural resource deposits.