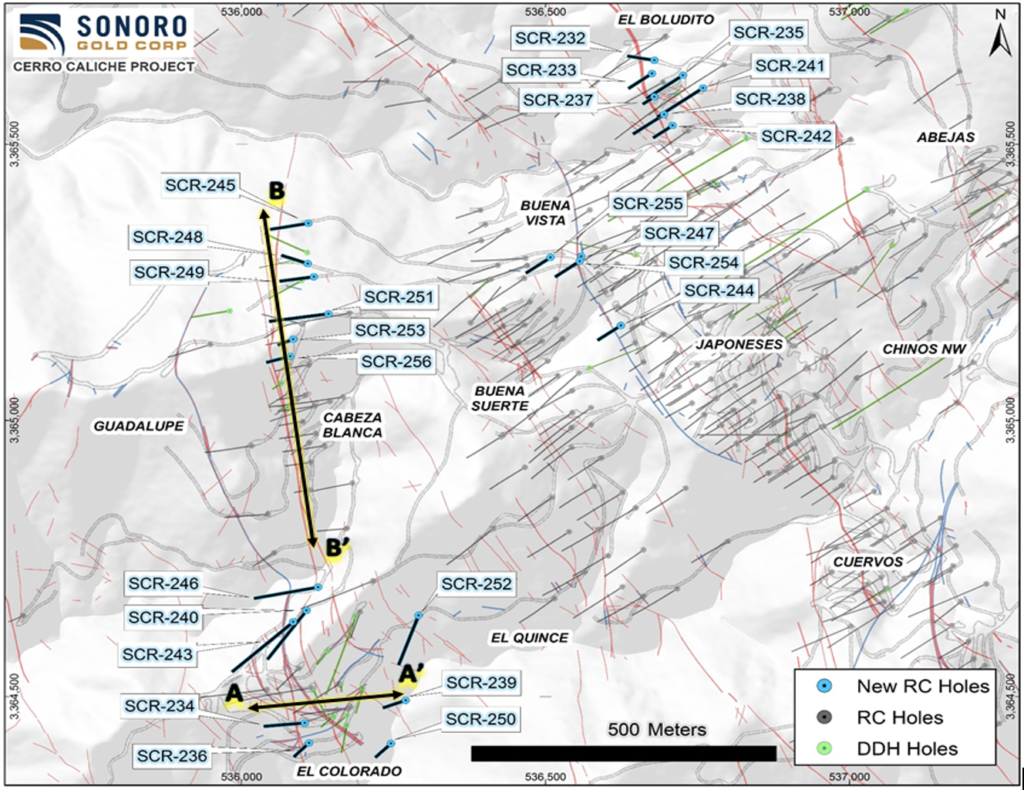 Eight additional drill holes were completed in the El Colorado gold mineralized zone, bringing the total drilled in the zone to 22 holes and further extending the dimensions of the zone to the north, south and east.  Gold bearing veins in this zone depart from the uniform northwest-prominent trend of the district and exhibit numerous splays and abrupt directional changes in the vein trends.  Mineralization at El Colorado remains open in all directions and to depth.

The image below illustrates a 300-meter cross section of selected drill holes at El Colorado.

Six new drill holes completed in the Cabeza Blanca gold mineralized vein zone extend the zone 50 meters to the north providing a more detailed understanding of the zone.  Cabeza Blanca remains open along strike to the north and may coalesce with the El Colorado structure to the south, suggesting a continuous strike length of over one kilometer.

At the northern extension of the zone, approximately 150 meters from the bottom of Laydame Canyon, drill hole SCR-245 intercepted 1.52 meters averaging 1.990 g/t Au within a 3.05 meter-wider intercept averaging 1.118 g/t Au.  The remaining five drill holes are spaced upslope to the south over a distance of 235 meters to the top of Cabeza Blanca ridge.

Among the six-drill holes recently completed at Cabeza Blanca, SCR-256 is the furthest south and is located approximately 35 meters north of the previously announced SCR-096 which intercepted 16.76 meters averaging 0.841 g/t Au including 4.57 meters averaging 2.419 g/t Au.

The image below illustrates a 600-meter longitudinal section of selected drill holes at Cabeza Blanca. 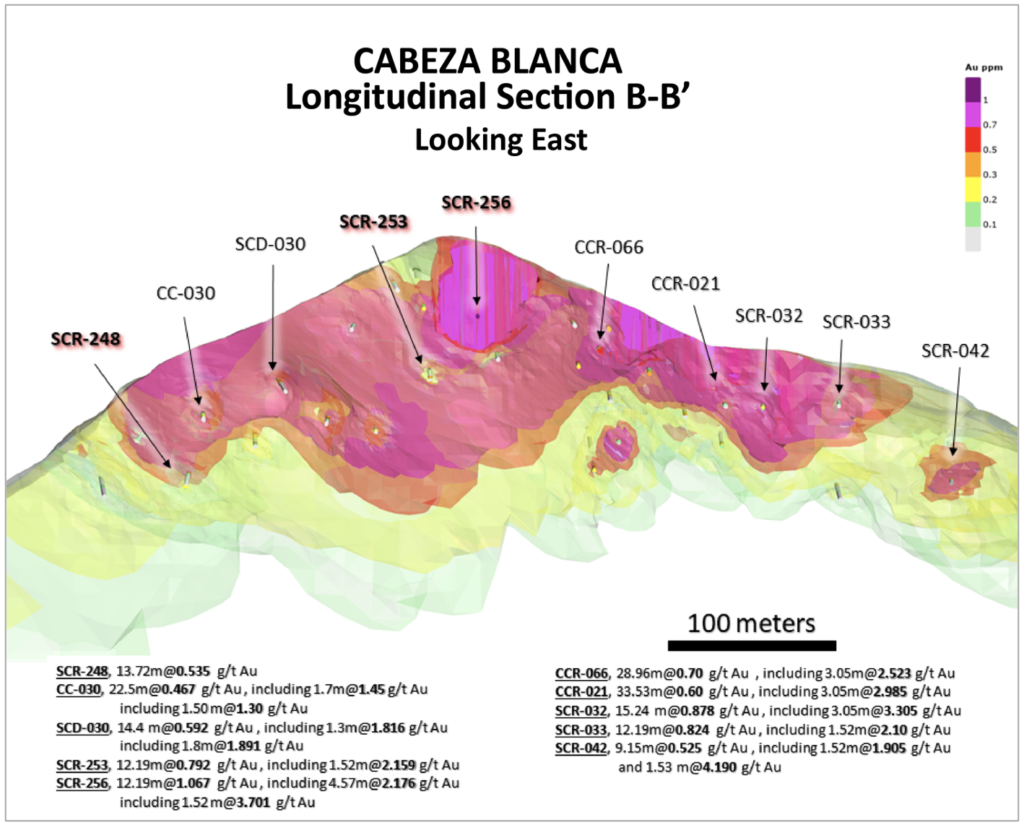 Drilling at the western extension of the Buena Vista zone continues to narrow the gap between the Japoneses–Buena Vista and Buena Suerte zones.  Each drill hole intercepted gold mineralization at or near surface.

Results from nine additional drill holes completed between Buena Vista and Buena Suerte are being processed for assays with results expected within ten days.  The Company anticipates these drilling results to further support the potential merging of the two zones into a single body of shallow, oxide gold mineralization.  If confirmed, a single larger gold mineralized zone may prove to have significant and positive economic implications for the Company’s proposed Heap Leach Mining Operation (HLMO).

Boludito Zone Extended to the North

Seven new holes drilled at the Boludito zone further confirm the zone’s mineralization as an extension of the strategically important 1.3-kilometer long Cuervos-Japoneses-Boludito gold mineralized structure.  All seven holes were drilled on the northern slope of Laydame Canyon situated to the south between the Boludito and Japoneses zones.  The group of drill holes indicate a general continuation of mineralization at lower gold grades with slightly higher silver content than mineralization identified south of the canyon bottom.

These drill holes represent an extension of the Boludito mineralized zone to the north of Laydame Canyon by approximately 150 meters.

Mel Herdrick, VP Exploration of Sonoro, stated, “These 25 drill holes have shown continuing expansion of gold mineralization in all four zones.  The final nine drill holes assay reports arriving over the next week will show the character of the area between the Buena Suerte and Buena Vista-Japoneses zones.  Surface rock in that area is strongly silicified with quartz veinlets all overprinting mylonite structures in quartzites with about one percent limonite from oxidation.  I consider this intermediate area to be prospective for additional gold mineralization.”

Kenneth MacLeod, President and CEO of Sonoro, stated, “Upon the imminent receipt of the final assays for the current phase of the drill program, our database will contain over 47,500 meters of historic and recent data from 433 core and RC holes, of which 34,550 meters were drilled by Sonoro since 2018.  The data will be processed by Micon International in the preparation of an updated NI 43-101 technical report and by D.E.N.M. Engineering in the preparation of a Preliminary Economic Assessment on the Cerro Caliche project.  We anticipate a resumption of the drilling program in August 2021, following receipt of these reports.”

John Darch, Chairman of Sonoro, added, “These drilling results continue to affirm the potential of Cerro Caliche to host a major deposit amenable to support the proposed 15,000 to 20,000 tonnes per day Heap Leach Mining Operation (HLMO).  Investors’ recognition of this potential was evident when our recent financing was over-subscribed despite being increased twice.  Of Cerro Caliche’s 18 zones, this drilling focused on four different gold zones – all demonstrating significant increases in size with more high-grade gold intercepts reported in every zone.  As these zones expand, many are evidencing coalescence into larger mineralized structures which would be optimal cost-wise if these multiple gold zones merge into a single major open pit mining operation.  With the conclusion of the current drilling program, the development of the Cerro Caliche HLMO should accelerate as we approach critical milestones, including Cerro Caliche’s NI 43-101 resource update, its preliminary economic assessment and securing project finance for the construction and commissioning of the mine.” 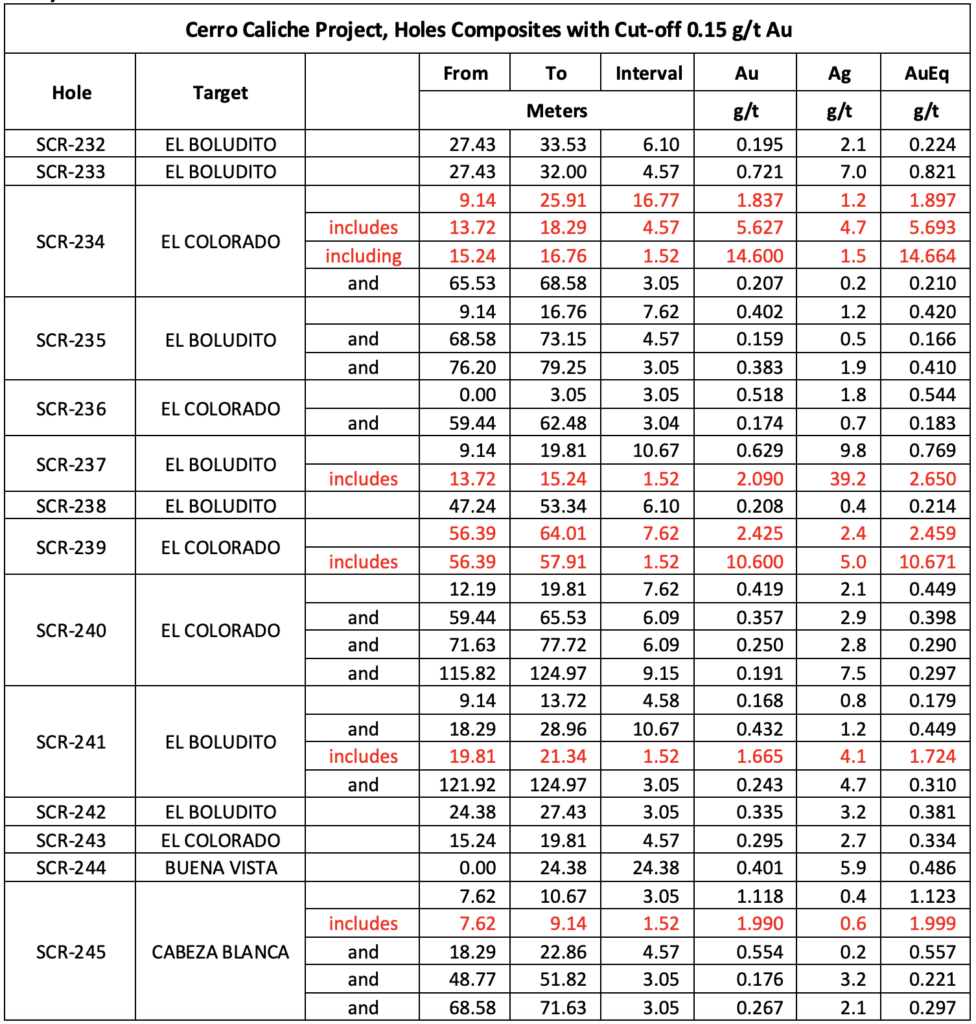 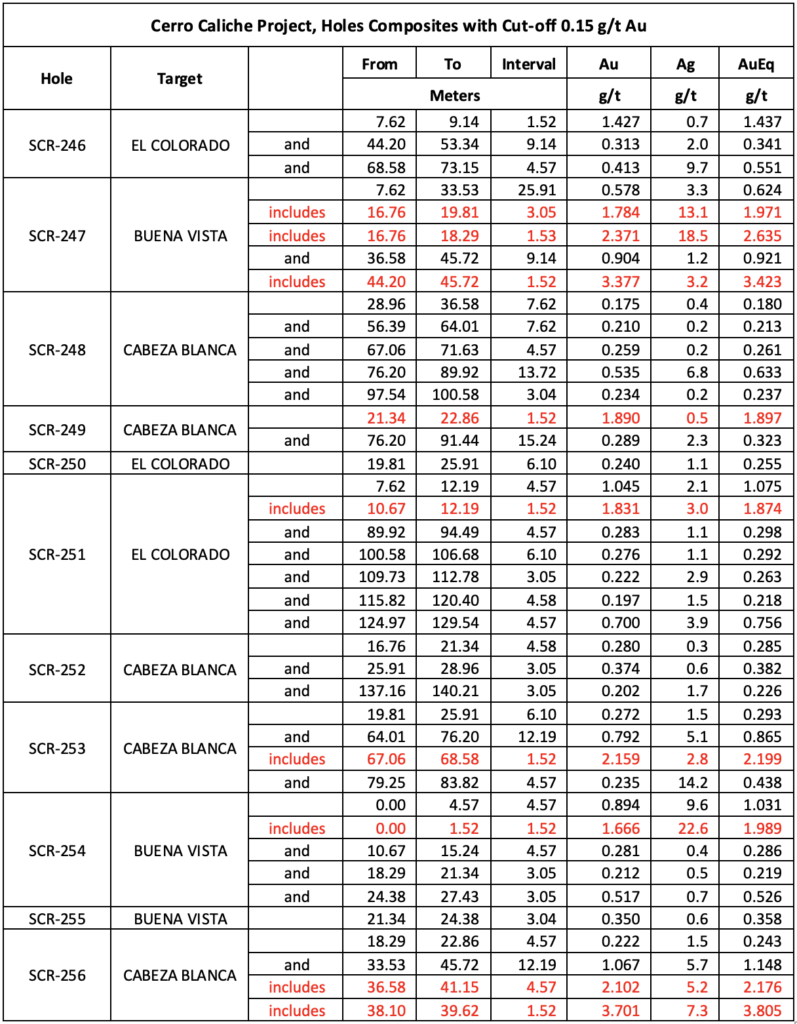 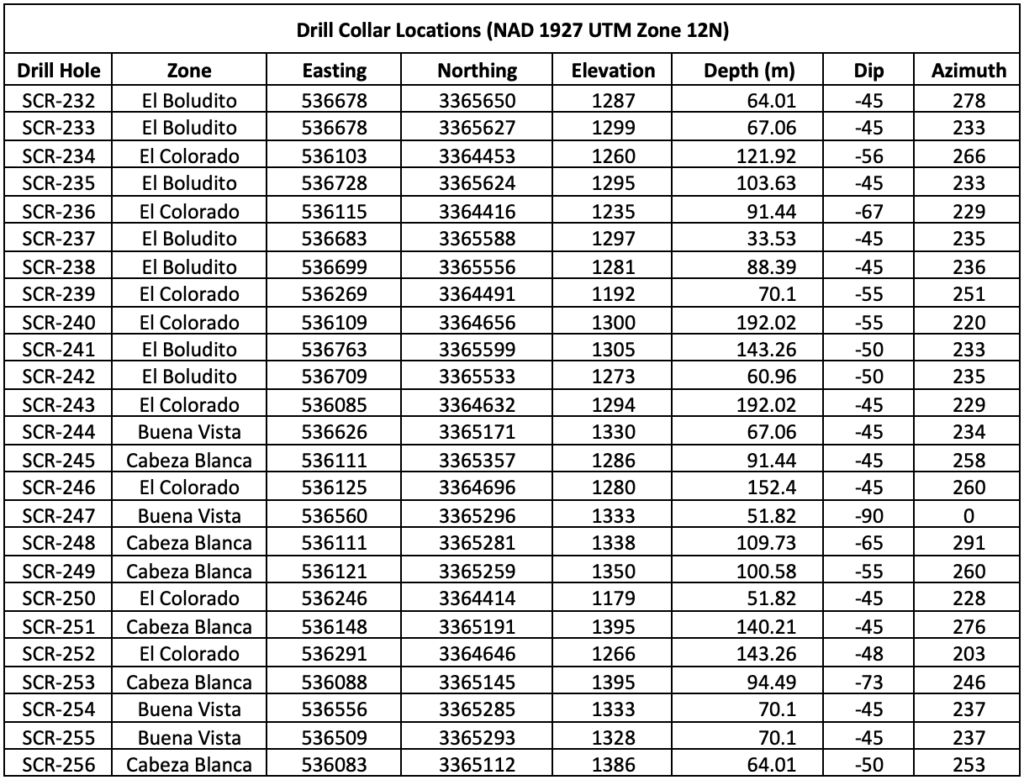 Bureau Veritas (BV) collects from the drill site the samples and transports them directly to the preparation laboratory in Hermosillo, Sonora.  At the preparation laboratory, a split part of each sample (about 500 grams) is reduced through crushing, splitting and pulverization.  Thirty grams of each pulverized sample is split apart in the Hermosillo laboratory and undergoes a “Fire Assay” for gold content by reducing the fire assay to a concentrated button of material that is dissolved in acids and the gold content determined by atomic absorption.  About another 200 grams of each sample are sent by BV to their Vancouver, Canada laboratory and dissolved there in aqua regia for multi-element ICP analysis, including silver.   No QA/QC issues were noted with the results received from the laboratory.

Stephen Kenwood, P.Geo., a Director of Sonoro, is a Qualified Person within the context of National Instrument 43-101 and has read and approved this news release.  Readers are cautioned that the presence of mineralization on historic mines adjacent to or on Cerro Caliche is not necessarily indicative of economic gold mineralization in the concessions held by the Company.

On April 20, 2021, the company announced the closing of its oversubscribed non-brokered private placement of 17,283,586 units at $0.18 per unit, for total gross proceeds of $3,111,045.  Each Unit consists of one Sonoro Common Share and one Share Purchase Warrant.  Each warrant entitles the holder to purchase one additional Sonoro Common share for a period of two years from the closing date at an exercise price of $0.30 per share.

The net proceeds from the Offering will be used principally to fund ongoing development plans at Cerro Caliche, including completion of metallurgical testing, preparation of a NI 43-101 resource update, a Preliminary Economic Assessment, in addition to property maintenance payments, and secondarily for corporate and general administrative expenses.