This group of drill holes has successfully enlarged the northwest and southeast extensions of the higher-grade mineralization at the now 450 meter long Buena Suerte zone, which remains open along strike to the northwest and southeast, in addition to extending the strike length of the premier Japoneses mineralized body.  The Japoneses increase, which occurred at the northerly Buena Vista and El Boludito extensions and the southerly extension at Cuervos, now demonstrate a continuous strike length of 1.3 km.  As in each of the previous 107 drill holes, all 20 of the current group of drill holes encountered reportable mineralization.  Assay highlights include the following key intercepts.

Drilling at the Buena Vista zone confirms that it represents the uninterrupted northwesterly extension component of the Japoneses zone and it remains open along strike to the northwest.  Multiple intercepts demonstrate mineralization to over 80 meters depth with deeper potential:

All drill holes are inclined 45 degrees crossing the intervals near perpendicular to the vein’s plane of mineralization. Interval true lengths are near the reported interval length but may be slightly less due to variations in vein zone dips.  A cut-off of 0.15 g/t Au was used for reporting intervals and, for consistency, is in the same format as in all previous news reports. 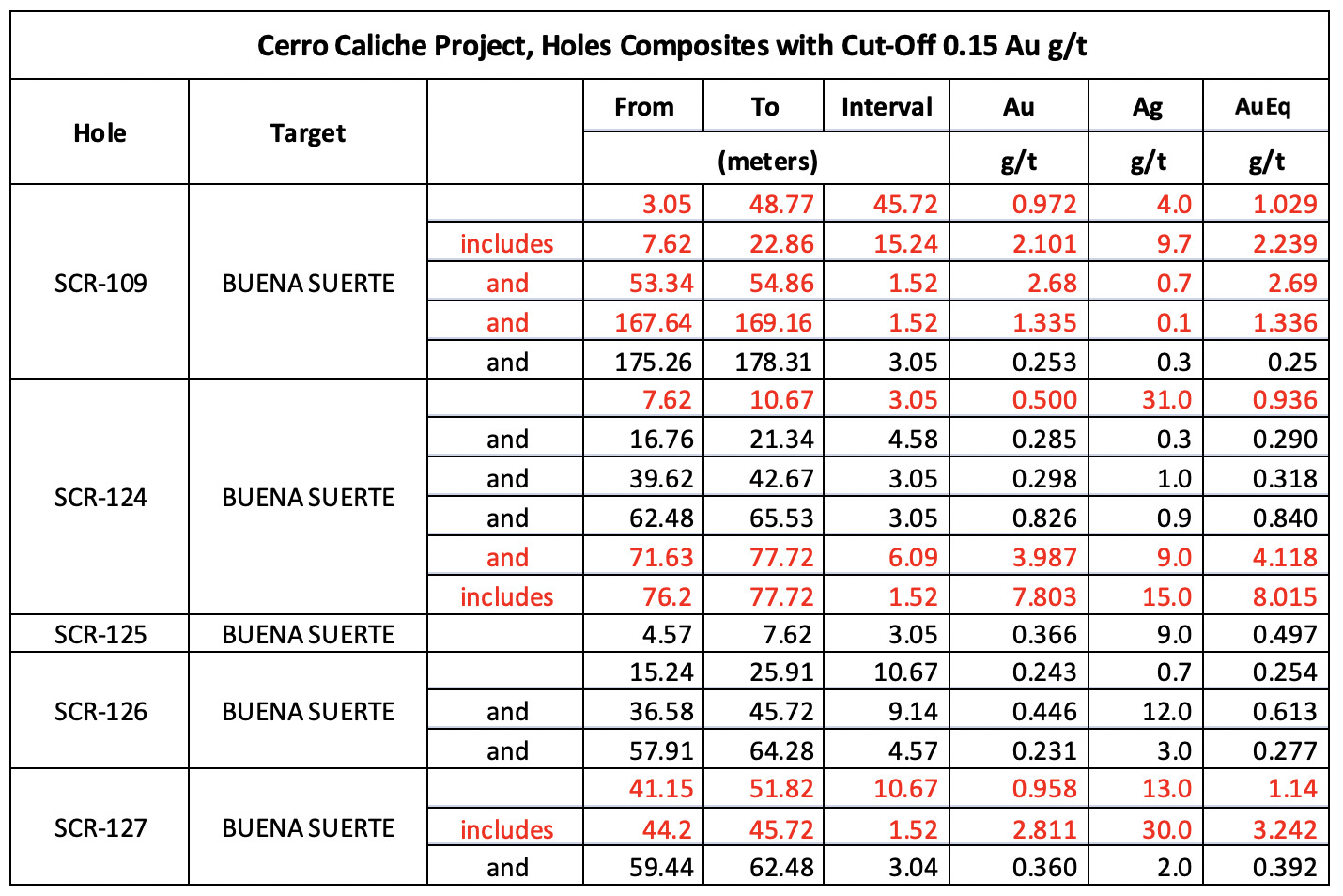 The Buena Suerte zone is independent of other zones, occurring 150-200 meters west of the Japoneses mineralized body. Most of this zone has thin soil cover, especially over the north slope trace of vein extension. The Buena Suerte zone is now confirmed to have more than 450 meters of strike length that is up to 30 meters wide with 80 meters of depth.  Host rocks are shattered and veined quartzite with local intrusive rhyolite and minor andesite dikes.  Further drilling in this zone has been designed to extend the mineralized zone both to the north and south. 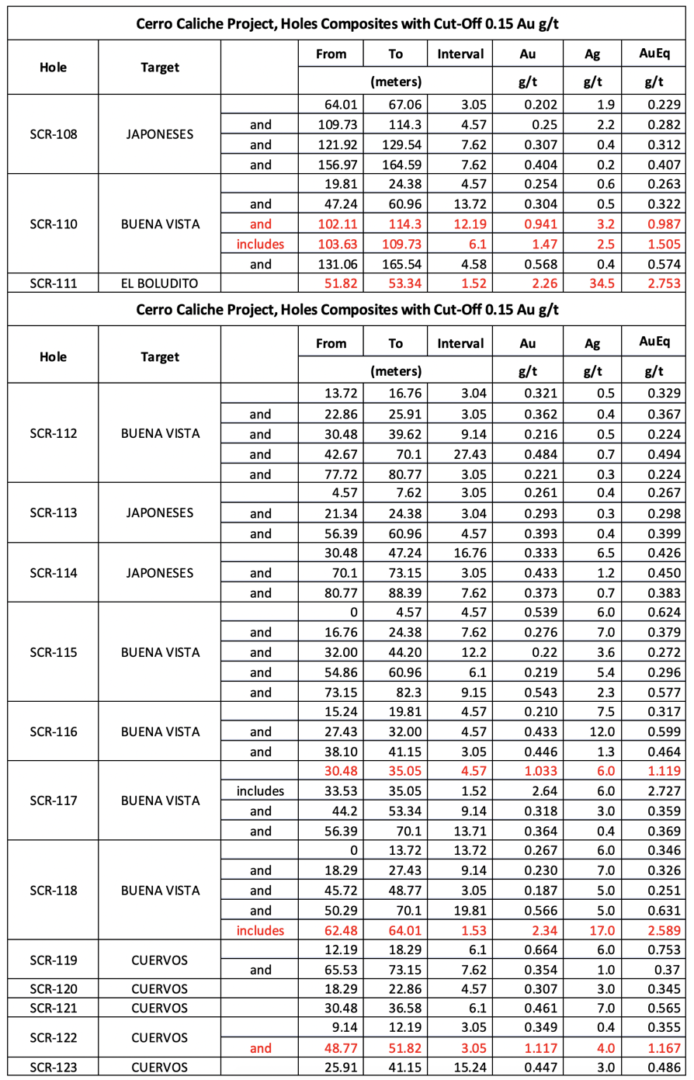 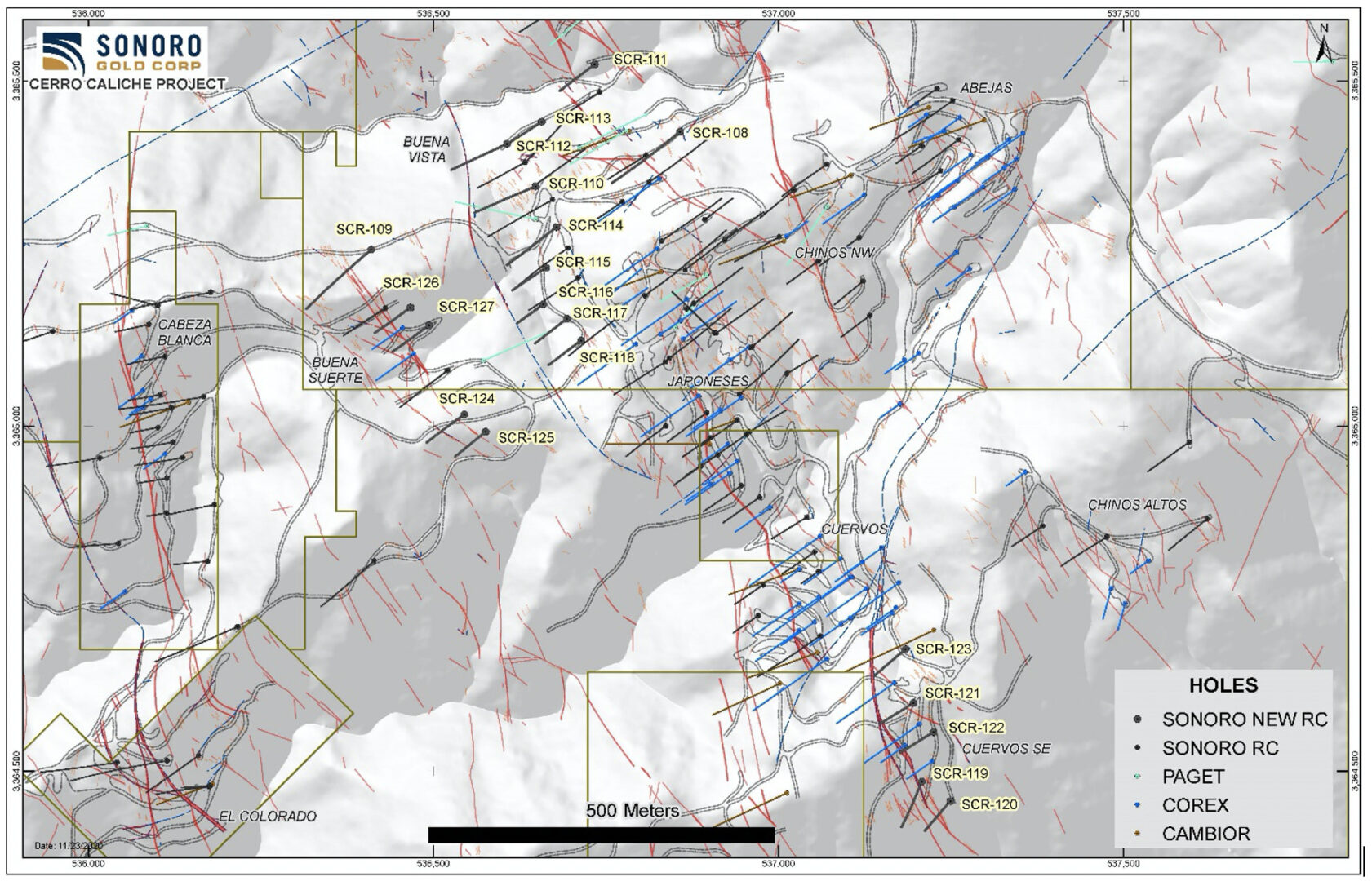 Drill collar locations, azimuths and dips for the drill holes included in this release are provided in the tables below and have been posted to the Company’s website for all drill holes. 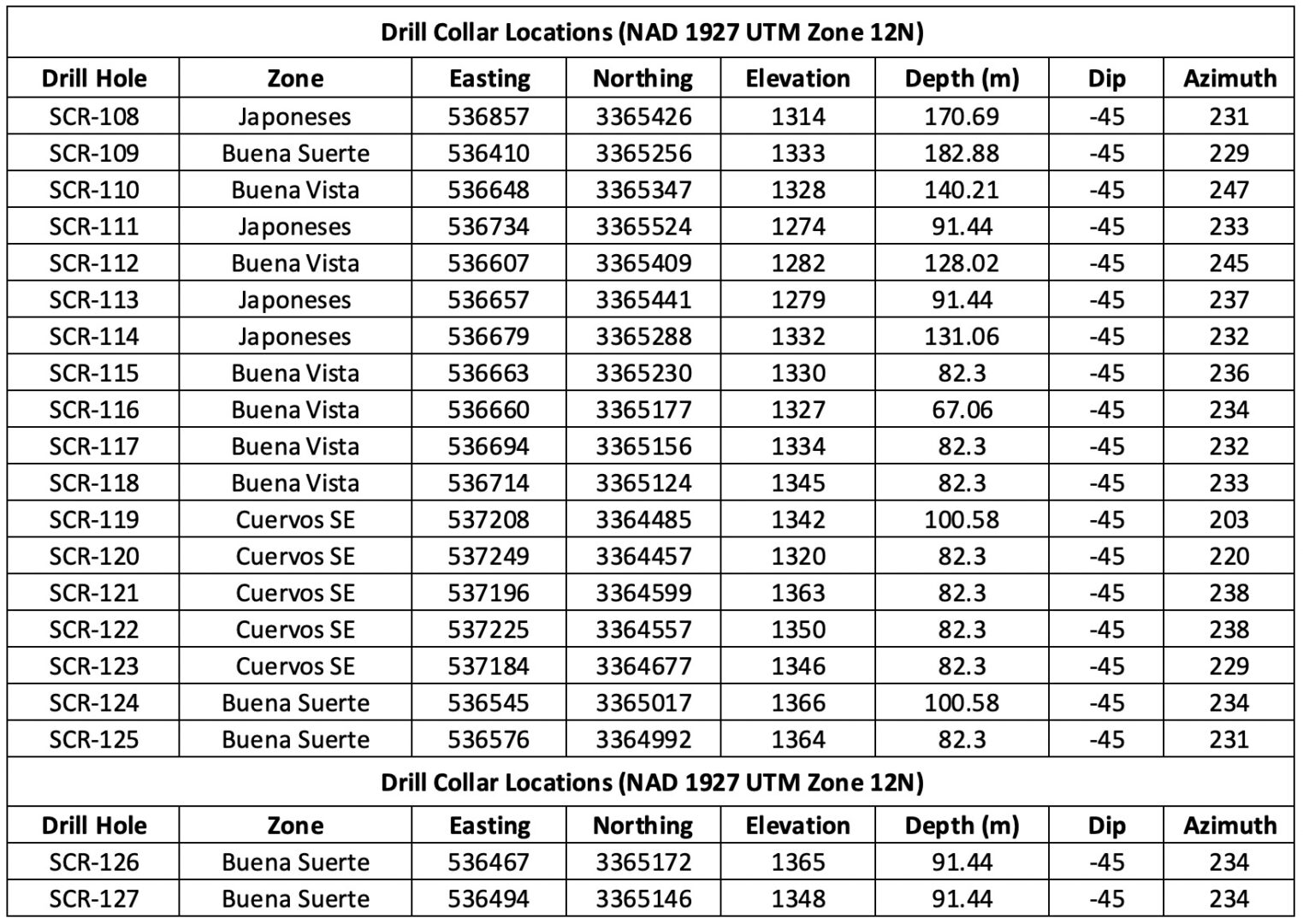 In total, 44 RC holes have been drilled this year to date, of which 32 have been reported, including the current group of holes. An additional 20 to 25 RC holes are expected to be completed by this coming mid-December and the Company expects that the results of all the drill holes to that date will be incorporated into a new NI 43-101 technical report for publication in the New Year.

Melvin Herdrick, Sonoro’s Vice President, Exploration, stated, “The evident success of the new RC drilling along with the parallel new exploratory core drilling that is oriented toward high grade targeting will be combined into a planned updated resource estimate in early 2021.  We anticipate that news in December will also include results from core drilling at El Colorado, where the potential for shoot definition exists, in addition to other more exploratory findings from satellite zones.”

Kenneth MacLeod, Sonoro’s President & CEO, added, “The latest assay results from Buena Suerte provide compelling evidence that it has become one of the prime targets for developing a new, higher grade mineralized zone at Cerro Caliche.  We are confident that the current results will contribute to a material increase of the current inferred resource estimate at Cerro Caliche.”

John Darch, Sonoro’s Chairman, further added, “The apparent increase in gold grades and substantial intercept widths adds to our confidence regarding both the viability of our planned 8,000 ton per day mining operation which is targeted to commence production next December 2021 and our longer term goal of materially increasing the size of the mineralized body and proposed mine by continuing to successfully explore and develop the property.”

The current exploration work is part of the Company’s conceptual fast-track development schedule for the Cerro Caliche project with the aspirational goal of commencing gold production by the end of 2021. Key milestones, whose achievement is essential for the successful realization of this goal, include the satisfactory completion of metallurgical testing, securing the required environmental permitting, receiving a favorable preliminary economic assessment (PEA) and obtaining the necessary project financing. On November 18, 2020, the Company announced that it had retained McClelland Laboratories Inc. of Sparks, Nevada to conduct independent metallurgical testing. These tests are a fundamental component of the PEA which in turn is expected to be completed by April 2021. Earlier this year, after a period of extensive analysis of the Cerro Caliche project data, a major China-based Engineering, Procurement and Construction (EPC) company executed a Memorandum of Understanding with Sonoro making it the third EPC company to formally pursue discussions with the Company regarding the proposed mine’s financing and development.

Drill samples are collected with an airstream cyclone and passed into a splitter that divides each sample into quarters. The quartered samples are then bagged and sealed with identification.  The sample group has blanks, standards and duplicates inserted into the sample stream.

ALS-Chemex collects the samples and transports them directly to the preparation laboratory in Hermosillo, Sonora.  At the laboratory, part of each sample is reduced through crushing, splitting and pulverization from which 200 grams is sent to the ALS-Chemex assay laboratory in Vancouver. Thirty grams undergoes fire assay for gold with the resulting concentrated button of material produced dissolved in acids and the gold content determined by atomic absorption. Another quantity of the sample is dissolved in four acids for an ICP multi-element analysis.

To improve upon assay turnaround times, the Company has contracted with the Hermosillo office of Bureau Veritas Laboratories to also provide assays in a timely fashion.  Accordingly, the samples are now being collected by Bureau Veritas for direct transport to the preparation and assaying laboratory in Hermosillo, Sonora.  At the laboratory, part of each sample is reduced through crushing, splitting and pulverization.  About 200 grams is sent by BV to their Vancouver, BC laboratory and dissolved in aqua regia for multi-element ICP analysis including silver. Thirty grams undergoes fire assay in Hermosillo for gold by reducing the fire assay to a concentrated button of material that is dissolved in acids and the gold content determined by atomic absorption.  No QA/QC issues were noted with the results received from either laboratory.

Host rocks include Jurassic-Cretaceous meta-sedimentary rock units including argillite, shale, quartzite, limestone, quartz pebble conglomerate and andesite.  Younger intrusive rock consisting of medium coarse-grained granodiorite-granite is present in the westerly parts of the concessions near the historic Cabeza Blanca Mine. It is apparent that veining cuts and pervasively alters the intrusive stock. Rhyolite occurs in irregular bodies distributed in higher elevations in the northerly part of the concession, including the Rincon area, where it occurs as flows, sills, dikes and rhyolite domes. Part of the rhyolite is mineralized and appears to be related to epithermal gold mineralization throughout the property.