VANCOUVER, Canada, May 9, 2022 – Sonoro Gold Corp. (TSXV: SGO | OTCQB: SMOFF | FRA: 23SP) (“Sonoro” or the “Company”) is pleased to announce the positive results of an updated independent Preliminary Economic Assessment (“PEA”) on the Company’s Cerro Caliche gold project located in Sonora State, Mexico.  The updated PEA highlights several opportunities to potentially increase the project’s previously reported economic parameters, as well as potentially lower several identified risks.  As the engineering and costing outlined in both the initial and updated studies are at the PEA level, potential variations in operation and capital costs may occur.

Based on the same mineral resource estimate contained in the Company’s initial PEA, dated October 29, 2021, the updated PEA contemplates an optimized mine plan for an open pit, heap leach mining operation with an initial two-year production rate of 8,000 metric tonnes per day (“mtpd”) and an increase to 15,000 mtpd for the remaining life of mine (“LOM”).

The updated PEA has been prepared in accordance with the requirements of National Instrument 43-101 (“NI 43-101”) by D.E.N.M. Engineering Ltd. of Burlington, Ontario (“D.E.N.M.”), with confirmation of the applicable resource estimates completed by Micon International Limited of Toronto, Ontario (“Micon”).

Note: All currencies are reported in U.S. dollars. Base case parameters assume $1,750/oz of gold and $22/oz of silver.
(1) Cash costs include mining, crushing, processing, assaying, and administration.
(2) All-in-Sustaining Costs include cash costs plus sustaining, refining and reclamation costs, as well as 2% royalties.

Ken MacLeod, President and CEO of Sonoro, stated, “We are very pleased with the improved economic parameters of the updated PEA.  Using the same resource calculations of the original PEA, we have optimized the mine plan to contemplate commencing production at a lower rate utilizing higher-grade ore, eventually ramping up to potential capacity of 15,000 mtpd in year three.  The result is a reduction in the estimated initial CAPEX of over 19% and an increase in after-tax NPV and IRR of 29% and 40.4%, respectively.”

John Darch, Chairman of Sonoro, added, “The updated PEA again highlights the intrinsic value of the Cerro Caliche project, and we continue to assess options to potentially further improve the project’s economic viability, such as leasing large capital cost equipment. The updated PEA does not include the nearly completed drilling campaign, which commenced in November 2021 after the initial PEA was published.  We are excited to review the potential for resource growth from the new geological data.  An increase in the size and grade of the resource may potentially further improve the project’s economics and extend the proposed life of mine.”

Readers are cautioned that these potential mineralization ranges are conceptual in nature and that despite being based on a limited amount of exploration drilling and sampling outside the current resource pit shells, it is uncertain that further exploration will result in the mineralization targets being delineated as a mineral resource.

Approximately 7,000 meters of additional drilling being completed at Cerro Caliche was not included in the current mineral resource estimate.  Final assay results are still pending with the new geological data to be included in a further updated resource estimate scheduled to be released in the fall of 2022.

Since drilling resumed in November 2021, the Company has announced multiple high-grade intercepts and expansions of several known mineralized zones in the southwestern region of the property.  The potential economic impact of these results on the proposed mining operation will also be assessed in the updated resource estimate.

The updated PEA is preliminary in nature and includes inferred resources that are considered too speculative to have the economic considerations applied to them that would enable them to be categorized as mineral reserves and there is no certainty the estimates presented in the PEA will be realized.

The full PEA will be filed on SEDAR at www.sedar.com and Sonoro’s website www.sonorogold.com within 45 days of the issuance of this news release. 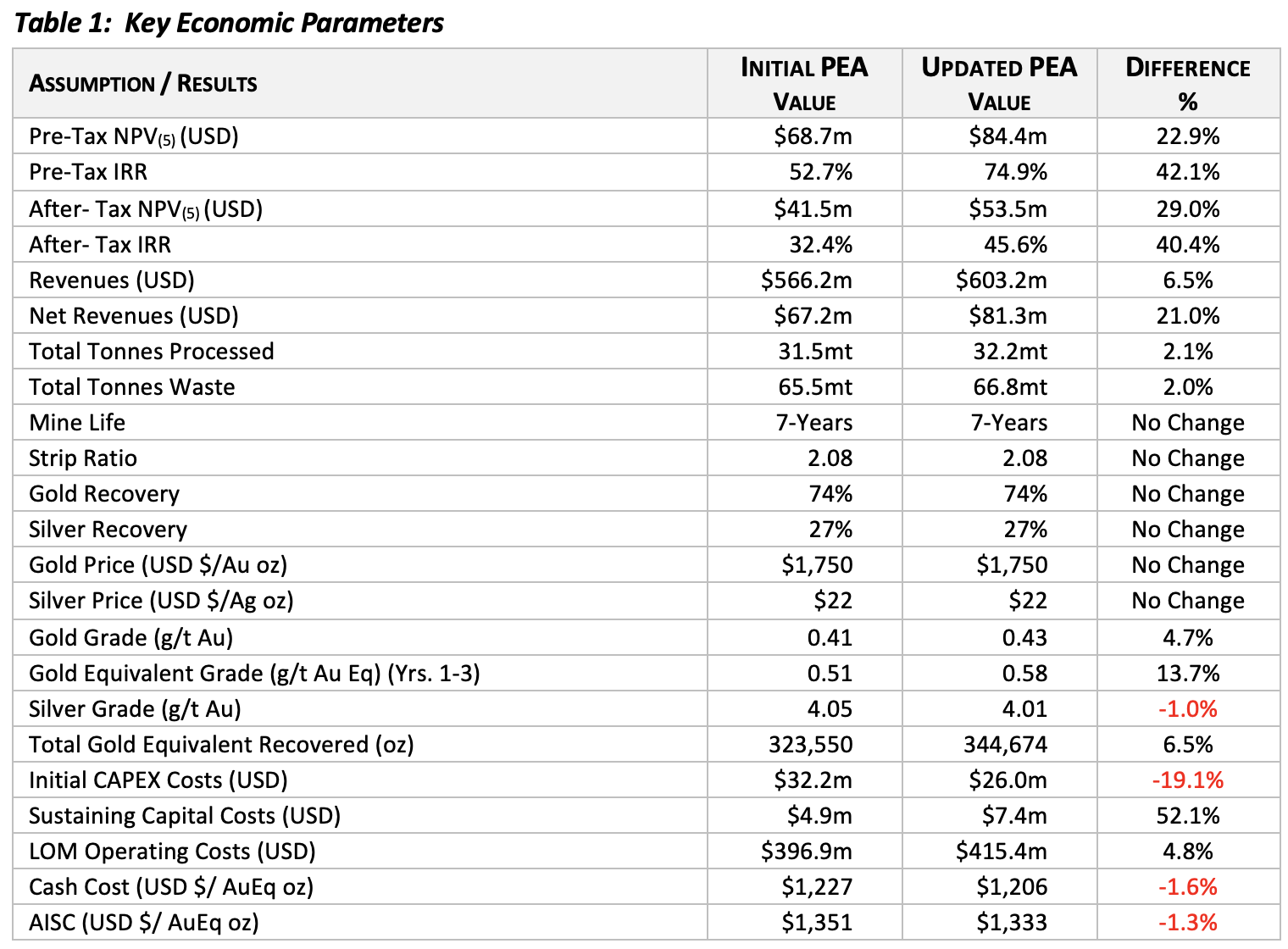 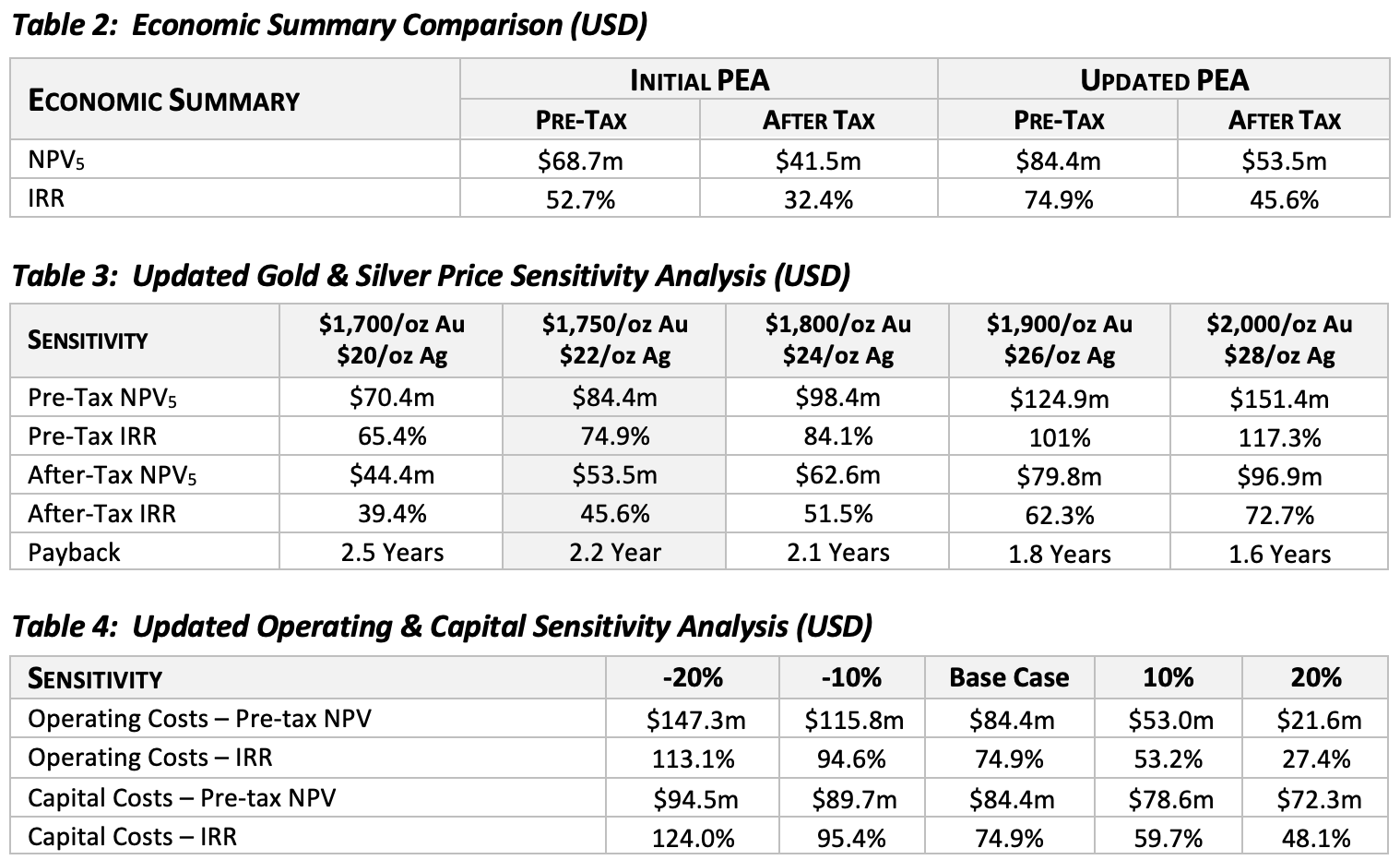 The updated estimated capital costs for the Cerro Caliche Gold Project are based on an open pit, heap leach operation with contract mining. Initial capital expenditures of USD $26 million, including 15% contingency, contemplates an initial two-year production rate of 8,000 mtpd with an increase to 15,000 mtpd in the third year of production.

An additional USD $7.4 million is estimated for updated sustaining capital including the expansion of the crushing circuit and heap leach pad, as well as equipment and equipment replacement costs.  Reclamation costs remain the same at an estimated USD $2.9 million.

Updated capital cost estimates are based on industry standards and were developed using quotes provided by mining contractors and specialists experienced in mining development in Mexico. 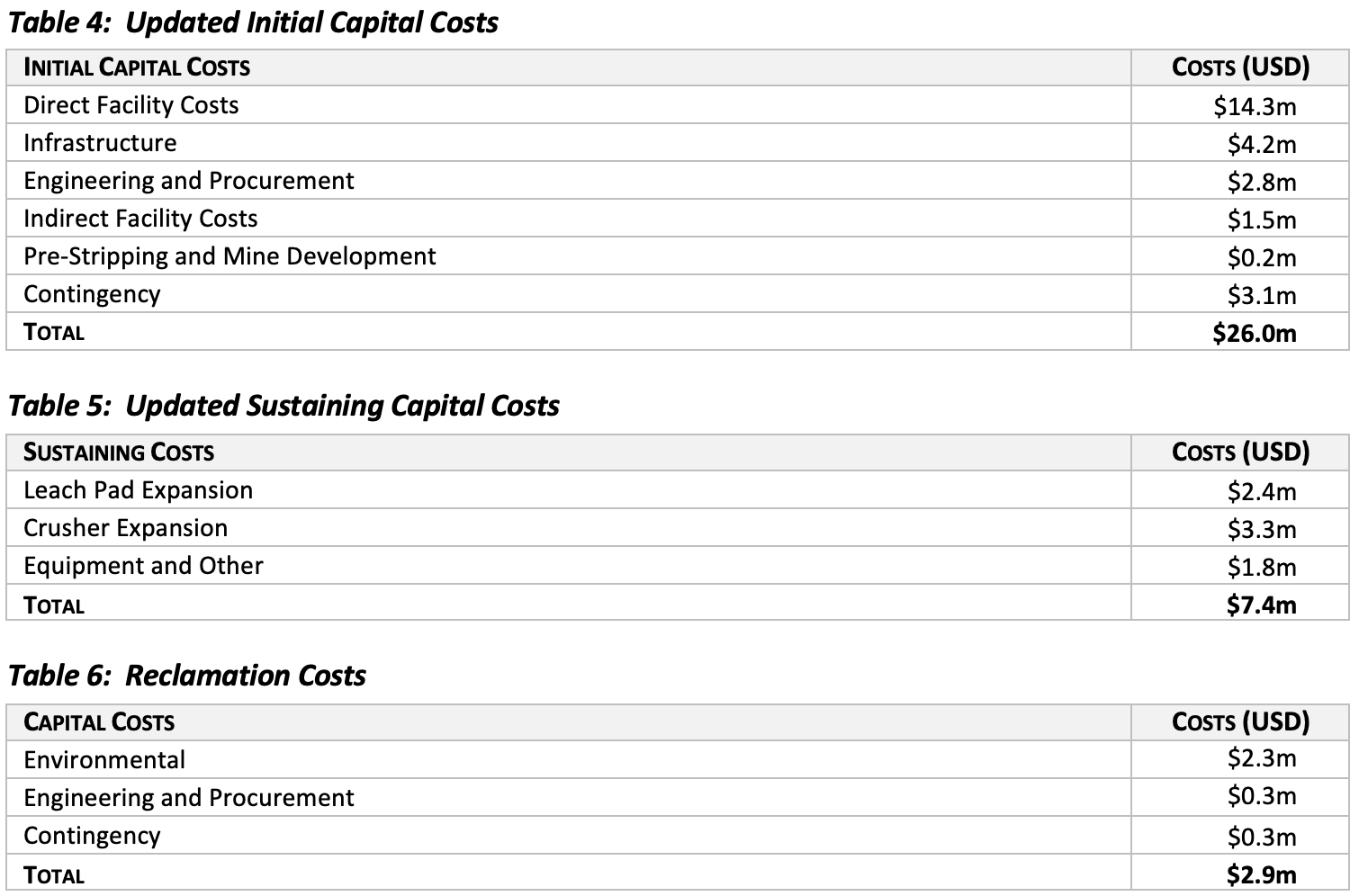 Royalties include a 2% NSR to certain landholders and taxes include payments to the Mexican government for mining royalty and specific mining related taxes.  Refining costs include shipping loaded carbon to a 3rd party processing facility, as well as costs for processing the carbon and production of doré bars.

Open pit mining will be undertaken by a contractor and carried out by drill and blast conventional loading and truck haulage to the crushing facility. An estimated mining cost of USD $1.85 per tonne includes drilling, blasting, hauling waste and mineralized ore to the heap leach area.

The processing facilities at Cerro Caliche will be comprised of a crushing circuit where mineralized material is processed through a three-stage crushing plant to produce material that is p80 of ½” (80% passing) method.  The material is then conveyed and stacked in a conventional heap leach pad and irrigated with a low concentrate cyanide solution.  An estimated crushing cost of USD $0.82 includes the cost of crushing and conveying.  Solution collected from the leach pad is then directed through a system of channels to the processing ponds where it passes through a series of carbon columns.  Gold and silver impregnated carbon is collected periodically from the columns and then dried and shipped to a 3rd party processing facility for stripping and doré bar production.  An estimated processing cost of USD $5.80 per tonne operating costs includes leaching, assaying, carbon handling and labour.

Operating cost estimates are based on industry standards and were developed using quotes provided by mining contractors and specialists experienced in mining development in Mexico.

Stephen Kenwood, P.Geo., a Director of Sonoro Gold, is a Qualified Person within the context of NI 43-101 and has read and approved this news release.

Micon International Limited (Micon) has provided consulting services to the worldwide mining industry since 1988 from its offices in Canada and the UK.  Micon comprises a multi-disciplinary group of highly qualified and experienced professionals who are guided by the Company principles of Integrity, Competence and Independence.

Micon’s experience in Mexico ranges from exploration programs and resource estimation to technical studies on operating mines, as well as due diligence for precious metals and base metals projects.  Micon has worked in most of the major mining districts throughout Mexico, as well as some lesser-known historical districts.  In northern Mexico, assignments have been undertaken in the gold and silver districts of Sonora, Durango, Zacatecas, Chihuahua and Baja California.

Sonoro Gold Corp. is a publicly listed exploration and development Company holding the near-development-stage Cerro Caliche project and the exploration-stage San Marcial project in Sonora State, Mexico.  The Company has highly experienced operational and management teams with proven track records for the discovery and development of natural resource deposits.

This press release may contain “forward-looking information” as defined in applicable Canadian securities legislation. All statements other than statements of historical fact, included in this release, including, without limitation, statements regarding the Cerro Caliche project, and future plans and objectives of the Company, including the NPV, IRR, initial and sustaining capital costs, operating costs, and LOM production of Cerro Caliche, constitute forward looking information that involve various risks and uncertainties. Forward-looking information is based on a number of factors and assumptions which have been used to develop such information but which may prove to be incorrect, including, but not limited to, assumptions in connection with the continuance of the Company and its subsidiaries as a going concern, general economic and market conditions, mineral prices, the accuracy of Mineral Resource Estimates. There can be no assurance that such information will prove to be accurate and actual results and future events could differ materially from those anticipated in such forward-looking information. Important factors that could cause actual results to differ materially from the Company’s expectations include exploration and development risks associated with the Company’s projects, the failure to establish estimated Mineral Resources or Mineral Reserves, volatility of commodity prices, variations of recovery rates, and global economic conditions. The forward-looking information contained in this release is made as of the date of this release. The Company disclaims any intention or obligation to update or revise any forward-looking statements, whether as a result of new information, future events or otherwise, except as required by law or the policies of the TSX Venture Exchange.  Readers are encouraged to review the Company’s complete public disclosure record on SEDAR at www.sedar.com.