There were no obvious variations in gold recovery related to ore zone or material type (vein breccia vs. stockwork). Cyanide consumption for the 12.5 mm feeds ranged from 0.36 to 0.80 Kg NaCN/mt (sodium cyanide per metric tonne) and averaged 0.55 kg NaCN/mt.

Key findings are as follows:

The map below shows the locations of the PQ core drill holes for the source of the tested material. 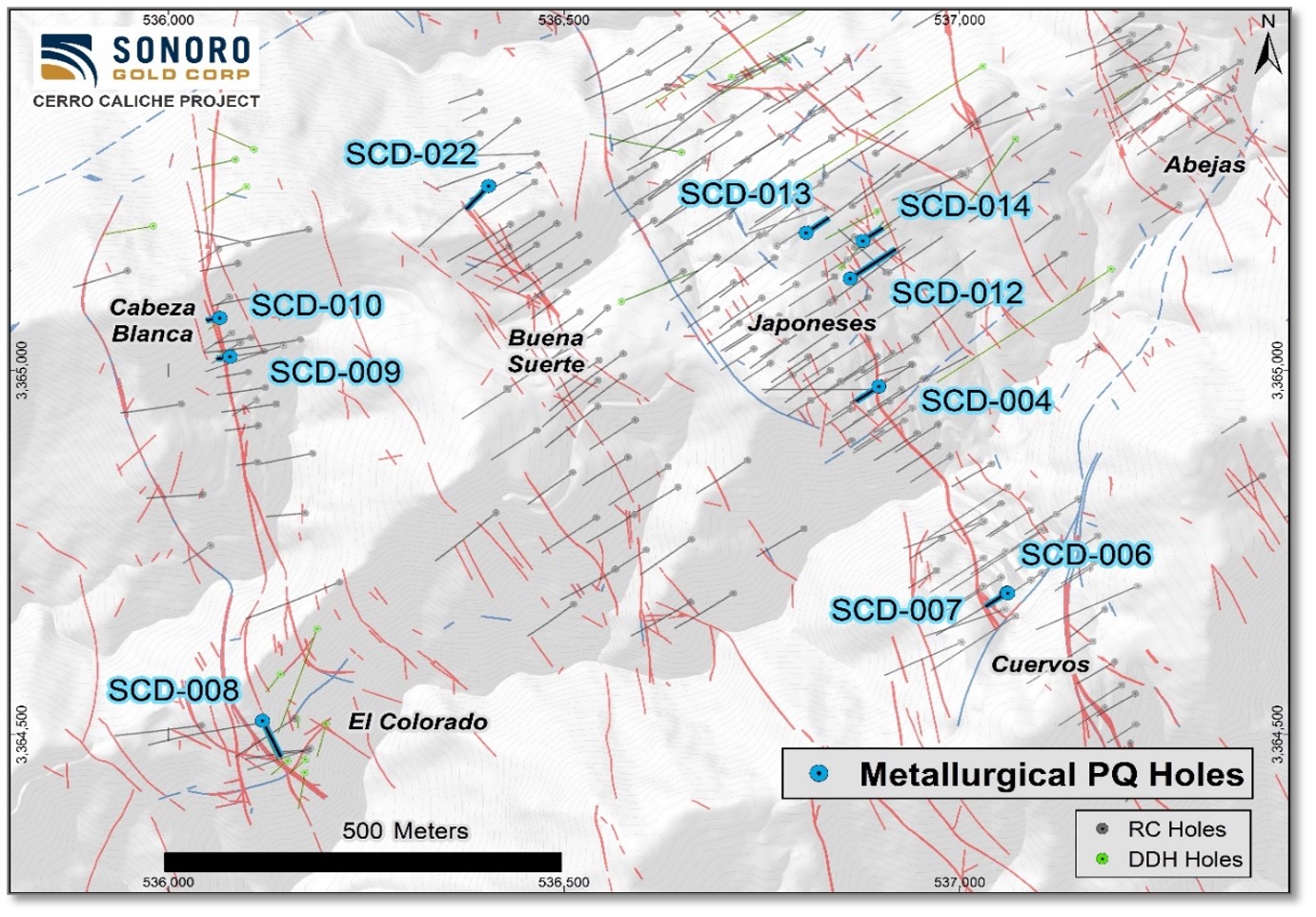 The recovery results are a critical component of the anticipated updated resource estimate, expected to be announced within the next few weeks. As previously disclosed, the Company engaged Micon International Limited (“Micon”) to complete the updated resource estimate as part of a Preliminary Economic Assessment (“PEA”) to be prepared by D.E.N.M. Engineering Ltd. (“D.E.N.M.”). The resource estimate will include all prior and current exploration data up to April 2021. To date, the Company has drilled and assayed results from over 34,500 meters of drilling, including 24,221 meters of new drilling since September 2020. When combined with historical data, total exploration at Cerro Caliche totals over 47,500 meters within 433 drill holes and 9,704 surface samples.

The mineralization analyzed in the metallurgical tests derived from five major gold mineralized zones at Cerro Caliche including Japoneses, Cuervos, El Colorado, Cabeza Blanca and Buena Suerte with both stock work and vein breccia material types. Preliminary information regarding heap leach amenability and sample variability was generated from bottle roll tests as previously reported by the Company on March 3, 2021.  These results were used in the formulation of the present column leach tests.

The column leach tests were conducted on each of nine composites at a minus 50 mm feed size and an 80% minus 12.5 mm feed size, to determine heap leach amenability and feed size sensitivity. These column test results confirmed all nine composites were amenable to simulated heap leach cyanide treatment.  The smaller 80% minus 12.5 mm feed size produced the best gold recoveries which ranged from 61.3% to 80.6% and averaged 74% after approximately 90 days, with moderate increases recorded in some of the column tests as the leaching cycle was extended.  Gold recoveries obtained at the minus 50 mm feed size ranged from 53.6% to 81.5% and averaged 66% after approximately 100 days.

Sonoro’s Chairman, John Darch, commented, “These very positive metallurgical test results are a critical milestone as Micon can now finalize Cerro Caliche’s updated resource estimate and allow D.E.N.M. to complete the project’s PEA. We appreciate our shareholders’ patience and ongoing support as we work to transform Sonoro from explorer to developer and finally to gold producer.”

The metallurgical tests have determined the heap leach characteristics of the oxide mineralization at Cerro Caliche while quantifying estimated gold and silver recoveries from the various mineralized zones near surface and at depth. These tests also establish the optimal crushing sizes and associated process flow sheet development.

The PQ drill cores for metallurgical testing were drilled to normal industry standards, with the cores sequentially placed in 4-row plastic core boxes, then kept in secure storage and packed onto wooden pallets prior to shipping to MLI by DHL Couriers.

No QA/QC issues were noted with the results received from the laboratory. MLI maintains accreditation with ISO/IEC Standard 17025:2017, for fields of testing that include the fire assay and solution analyses used for the current metallurgical testing program.

Stephen Kenwood, P.Geo., a Director of Sonoro, is a Qualified Person within the context of National Instrument 43-101 (NI 43-101) and has read and approved this news release. Readers are cautioned that the presence of mineralization on historic mines adjacent to or on Cerro Caliche is not necessarily indicative of gold mineralization in the concessions held by the Company.

MLI has been providing quality laboratory and consulting services to the minerals industry for over 33 years. Their services include metallurgical, environmental, analytical testing and consulting to meet their clients’ needs during all phases of project development, operation, and closure. MLI started as a lab dedicated to the gold, silver and copper industries and has expanded to provide services in a wide range of mineral markets.

MLI has an experienced staff of metallurgical, chemical, and environmental science and engineering professionals and technicians working in over 44,000 square feet of laboratory and office space in Sparks, Nevada. MLI works closely with their clients to design testing programs which meet their project objectives. The MLI philosophy is to design testing programs and procedures to produce the maximum amount of data to efficiently add value to their clients’ projects. MLI understands that attention to detail and quality of work, along with prompt professional service, are of utmost importance to their clients.

Forward-Looking Statement Cautions: This press release contains certain “forward-looking statements” within the meaning of Canadian securities legislation, relating to, among other things, the Company’s plans for the exploration, development and operations at the above-described Cerro Caliche Concessions, located in the municipality of Cucurpe, Sonora, Mexico, including statements regarding the Company’s plans for additional metallurgical testing, a planned resource update and preliminary economic assessment (“PEA”) reporting on the viability of a proposed 20,000 tonne/day mining operation, and other material conditions set out above on which the Company’s development plans are dependent.  Although the Company believes that such statements are reasonable based on current circumstances, it can give no assurance that such expectations will prove to be correct.  Forward-looking statements are statements that are not historical facts; they are generally, but not always, identified by the words “expects”, “plans”, “anticipates”, “believes”, “intends”, “estimates”, “projects”, “aims”, “potential”, “goal”, “objective”, “prospective” and similar expressions, or that events or conditions “will”, “would”, “may”, “can”, “could” or “should” occur, or are those statements, which, by their nature, refer to future events.  The Company cautions that forward-looking statements are based on the beliefs, estimates and opinions of the Company’s management on the date the statements are made and they involve a number of risks and uncertainties, including the possibility of unfavourable exploration and test results, unfavourable results of the contemplated PEA of the Cerro Caliche project, the lack of sufficient future financing to carry out exploration and development plans and unanticipated changes in the legal, regulatory and permitting requirements for the Company’s exploration programs.  There can be no assurance that such statements will prove to be accurate, as actual results and future events could differ materially from those anticipated in such statements.  Accordingly, readers should not place undue reliance on forward-looking statements.  The Company disclaims any intention or obligation to update or revise any forward-looking statements, whether as a result of new information, future events or otherwise, except as required by law or the policies of the TSX Venture Exchange.  Readers are encouraged to review the Company’s complete public disclosure record on SEDAR at www.sedar.com.