SCD-021 is the southeastern-most drill hole at El Rincón and the furthest step-out hole toward Veta De Oro.  Future drilling at El Rincón will continue to step out to the southeast to further investigate the zone’s projected extension towards the Veta de Oro Zone.

The combined El Rincón – Veta de Oro gold mineralized zone, which remains open along strike to the northwest, also continues southeast for an additional 500 meters along a zone of vein stockwork from Veta de Oro Zone to Abejas, resulting in a total mineralized vein system length of approximately 2 km.

At the 1.3 km long Japoneses gold mineralized zone, infill drilling continues to add to the mineralized body with the most recent four drill holes identifying long intercepts of gold mineralization from surface.  Infill drilling is being conducted to close the spacing between earlier drill holes to enable the resulting assays to be incorporated into future resource calculations.

At the increasingly important Buena Suerte gold mineralized zone, drilling continues to confirm the potential extension of the mineralization along strike in both directions.  Southeast of the zone, SCR-128 intercepted 12.19 meters averaging 0.41 g/t AuEq.  Concurrently, access roads and drill pads were constructed in the northwest portion of the zone to investigate the northwest extension along strike from hole SCR 109, which, as previously reported, intercepted 45.72 meters averaging 0.97 g/t Au, including 15.24 meters averaging 2.1 g/t Au. 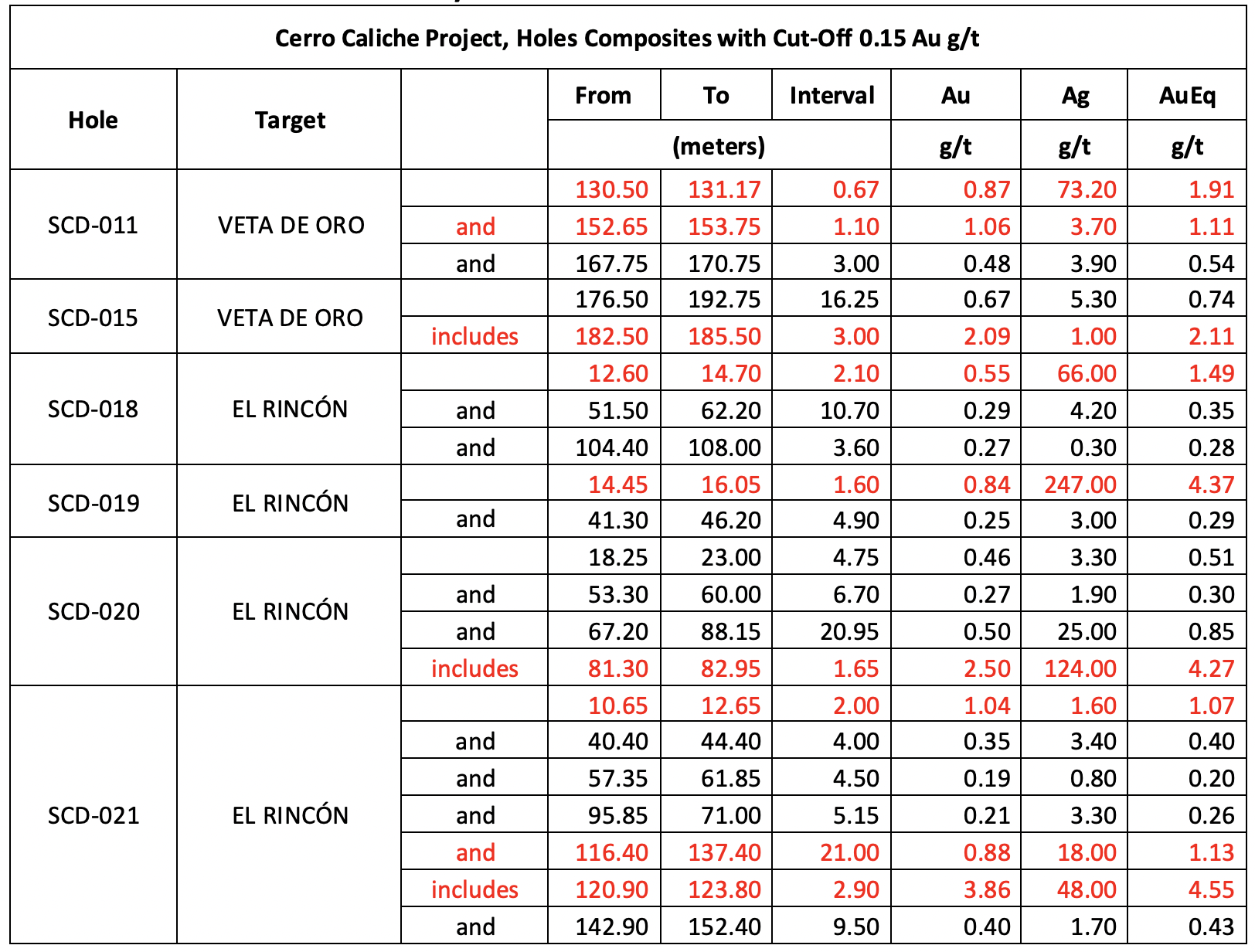 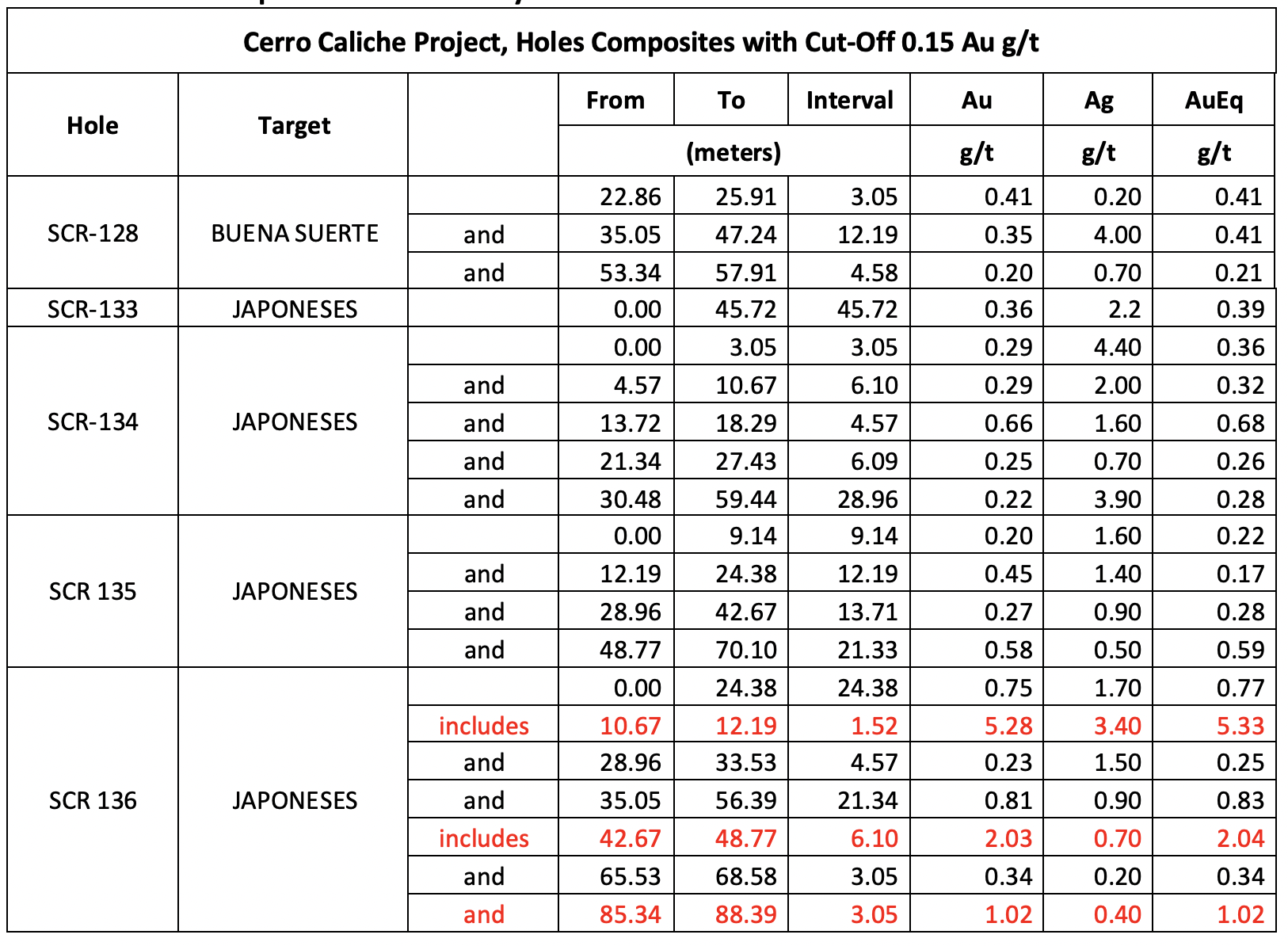 Drill holes SCR-129 through SCR-132 at the Sultan Zone, located on the eastern boundary of the Cerro Caliche concession, contained only minor intervals with low gold content without any reportable significant gold bearing zones.  Numerous quartz veins were cut and contained strongly anomalous lead as well as low silver.  The geochemical information, along with core recovered, showed a lack of boiling zone indicators which suggest the Sultan area is too deep in the epithermal system.

Melvin Herdrick, Sonoro’s Vice President Exploration, stated, “We are pleased to see the Buena Suerte and Rincon zones showing consistent growth of their mineralized zones and additional assays are anticipated for these zones shortly.  While the results from the Sultan zone did not show productive gold grades, the holes provided valuable information by demonstrating indicators of vertical zoning and the presence of high lead levels.  Therefore, our high-grade drilling program will focus on our inventory of priority targets existing at Cerro Caliche’s higher elevations, where boiling zone textures occur in veining within rhyolite. Overall, our campaign to drill Cerro Caliche’s extensive shallow gold mineralization continues to produce good grades over significant widths.”

Drill collar locations, azimuths and dips for the drill holes included in this release are provided in the table below and have been posted to the Company’s website for all drill holes.

All drill holes are inclined 45 degrees, crossing the intervals near perpendicular to the vein’s plane of mineralization.  Interval true lengths are near the reported interval length but may be slightly less due to variations in vein zone dips.  A cut-off of 0.15 g/t Au was used for reporting intervals and, for consistency, is in the same format as in all previous news reports.

Low-cost, air track percussion drilling was recently initiated to investigate near surface mineralization to a depth of 30 meters and identify prospective areas for drilling.  Rapid progress is made with an average of three air track holes completed per day with samples collected at 1.5-meter (5 ft) intervals for assaying.

The Company is continuing to advance its conceptual fast-track development schedule for the Cerro Caliche project with the aspirational goal of commencing gold production by the end of 2021.  A successful realization of that goal remains subject to certain material conditions, most notably including the satisfactory completion of metallurgical testing, securing required environmental permitting, a favorable preliminary economic assessment and the availability of project financing.  As an important step in the execution of its plans, Sonoro has engaged two independent consulting firms to provide NI 43-101 compliant technical reports regarding a proposed Heap Leach Mining Operation (HLMO).

Ontario-based D.E.N.M. Engineering Ltd. (D.E.N.M.) has been engaged to prepare an NI 43-101 compliant Preliminary Economic Assessment (PEA) under the direction of President David Salari, P.Eng.  Mr. Salari is responsible for coordinating the metallurgical testing currently underway at McClelland Laboratories and the preparation of an NI 43-101 compliant updated resource report in conjunction with Toronto-based Micon International Limited (Micon).  Micon has been contracted and will be responsible for the completion of the updated mineral resource estimate, which is scheduled to be completed concurrently with the metallurgical testing during the second quarter of 2021.  The mineral resource estimate will include results from all prior and current drilling to December 2020.

Both D.E.N.M. and Micon are well known and respected in the mining industry and have been selected based on their expertise in evaluating gold mining projects specifically located in Sonora state and northern Mexico.

Kenneth MacLeod, Sonoro’s President & CEO, added, “The drill results from Cerro Caliche continue to demonstrate the continuity of gold mineralization along each of the main parallel zones investigated to date.  The combined Rincon, Veta de Oro and Abejas zones show continuous mineralization over 2 km in length and the Japoneses Zone is continuously mineralized over 1.3 km in length.  The recently identified higher-grade zone at Buena Suerte has been measured at 450 meters long.  We are confident that the latest results will contribute further to a material increase of the current 201,000 AuEq inferred resource estimate at Cerro Caliche.”

“With the engagement of D.E.N.M. Engineering, Micon International and McCelland Laboratories, our transformation from an exploration company to gold producer is accelerating, just as our drill results continue to provide a real potential for a substantial increase in our current gold resource,” John Darch, Sonoro’s Chairman, commented.  “I think it’s quite apparent that the recent higher grade drill intercepts are likely to materially enhance our prospects for a favorable PEA.  Given the results thus far and the timeline for next year, I expect the next 12 months will be exceptionally rewarding for Sonoro and its stakeholders.”

Bureau Veritas collects the samples and transports them directly to the preparation laboratory in Hermosillo, Sonora.  At the laboratory, part of each sample is reduced through crushing, splitting and pulverization.  About 200 grams are sent by BV to their Vancouver, BC laboratory and dissolved in aqua regia for multi-element ICP analysis including silver.  Of these samples, 30 grams undergo fire assay in Hermosillo for gold by reducing the fire assay to a concentrated button of material that is dissolved in acids and the gold content determined by atomic absorption.

Samples from SCD-015 were collected by ALS-Chemex and transported directly to the preparation laboratory in Hermosillo, Sonora.  At the laboratory, part of each sample is reduced through crushing, splitting and pulverization from which 200 grams is sent to the ALS-Chemex assay laboratory in Vancouver.  Thirty grams undergoes fire assay for gold with the resulting concentrated button of material produced is dissolved in acids and the gold is determined by atomic absorption.  Another quantity of the sample is dissolved in four acids for an ICP multi-element analysis.

No QA/QC issues were noted with the results received from either laboratory.

Host rocks include Jurassic-Cretaceous meta-sedimentary rock units including argillite, shale, quartzite, limestone, quartz pebble conglomerate and andesite.  Younger intrusive rock consisting of medium coarse-grained granodiorite-granite is present in the westerly parts of the concessions near the historic Cabeza Blanca Mine.  It is apparent that veining cuts and pervasively alters the intrusive stock.  Rhyolite occurs in irregular bodies distributed in higher elevations in the northerly part of the concession, including the Rincon area, where it occurs as flows, sills, dikes and rhyolite domes.  Part of the rhyolite is mineralized and appears to be related to epithermal gold mineralization throughout the property.

In addition, D.E.N.M. Engineering, with its principal and independent specialists, can perform NI 43-101 complaint assessments and studies in the sections of mineral processing metallurgical design, process design, capital and operating costing and cash flow analysis.

Micon International Limited (Micon) has provided consulting services to the worldwide mining industry since 1988 from its offices in Canada and the UK.  Micon comprises a multi-disciplinary group of highly qualified and experienced professionals who are guided by the Company principles of Integrity, Competence and Independence.

Micon’s experience in Mexico ranges from exploration programs and resource estimation to technical studies on operating mines as well as due diligence for precious metals and base metals projects.  Micon has worked in most of the major mining districts throughout Mexico, as well as some lesser-known historical districts.  In northern Mexico, assignments have been undertaken in the gold and silver districts of Sonora, Durango, Zacatecas, Chihuahua and Baja California.