Cerro Caliche has been the subject of both artisanal mining and more modern exploration campaigns, including sampling and drilling by Corex Gold Corp. in 2007, the results of which have been provided to Sonoro.

“The initial results from this first phase of drilling at Cerro Caliche support the veracity of drilling conducted by prior operators within the project area and most notably the work done by Corex,” said Kenneth MacLeod, President and CEO of Sonoro. “The drilling has further confirmed that mineralization in the Los Japoneses zone remains open in all directions, including at depth.”

Results from the drilling reported in the table shown below are from drill holes targeting the Los Japoneses target, one of seven zones on the Cerro Caliche property where artisanal mining activity occurred. 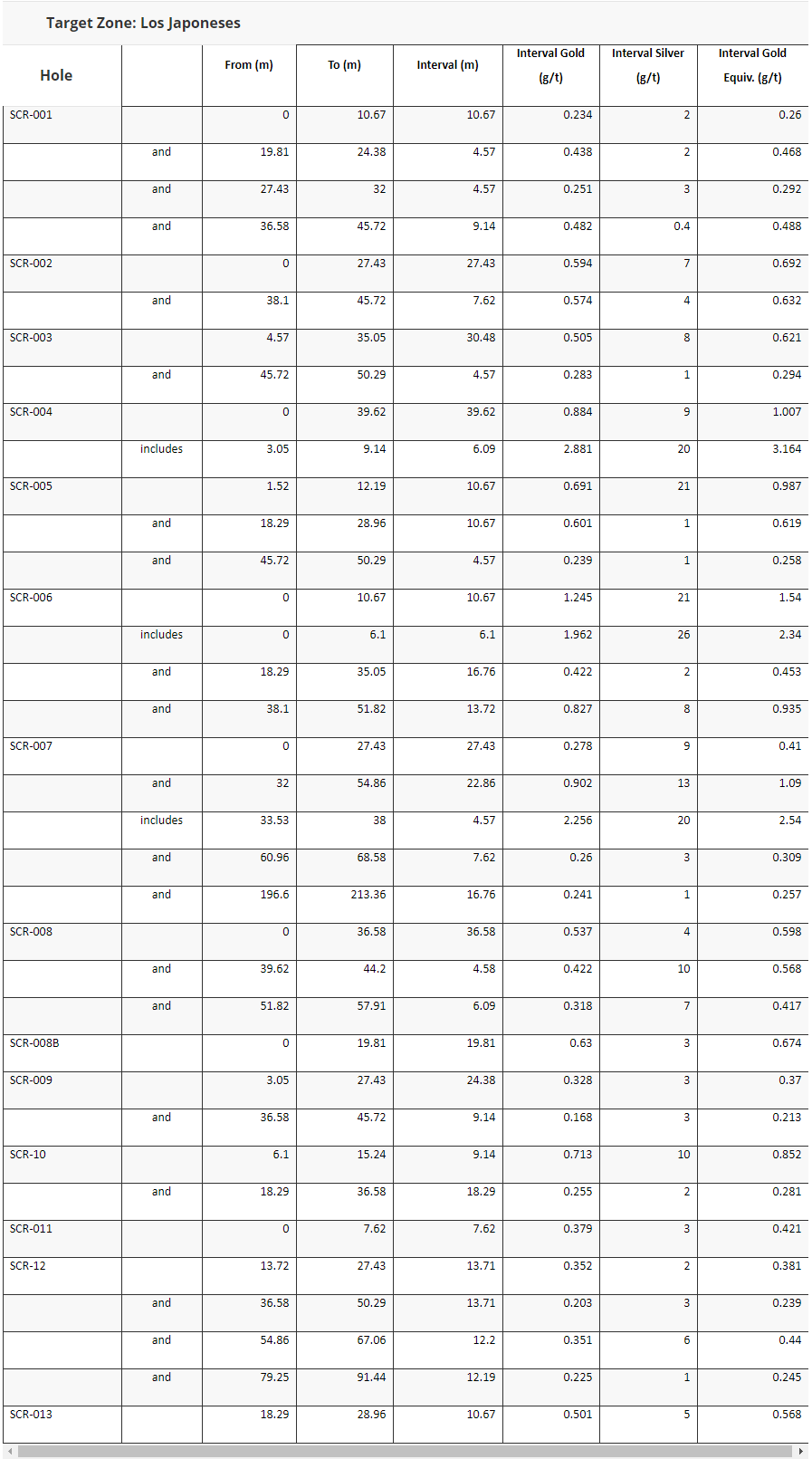 Numerous veins and veinlets were cut that support the concept of a broadly mineralized epithermal vein system. Mineralized intervals range from 3 meters to over 40 meters. The attitudes of the veins cut in the drilling is generally about 70 degrees with the drill holes angled at 45 degrees, so the widths of the mineralized intercepts are about 60 percent of the intercepted widths.

Drill samples are collected with an airstream cyclone, then passed into a splitter that quarters the large sample. The resulting quartered sample is bagged in plastic with identification and then sealed. The sample group during drilling has blanks, standards, and duplicates inserted into the sample stream. The samples are picked up by the ALS-Chemex truck and taken directly to their preparation laboratory in Hermosillo, Sonora. The preparation laboratory reduces part of the sample to a pulverized quantity from which 500 grams is sent to the ALS-Chemex assay laboratory in Vancouver. Thirty grams are taken for fire assay for gold with the resulting button dissolved and gold determined with atomic absorption. Another quantity is dissolved in four acids for the ICP multi-element analyses.

After preparation, consisting of fine crushing, splitting, and pulverization, the samples are then sent to Vancouver, BC for laboratory analyses by fire assay for gold with an AA finish. Another separate fraction is dissolved by four acid mix and multi-elements determined.

The Cerro Caliche drilling program is being carried out in two phases, with a total of approximately 5,000 meters of drilling planned for each phase. The current drilling will include more near-surface confirmation and enhancement at the Cabeza Blanca target, approximately one kilometer west of the Los Japoneses target area.

The Cerro Caliche concessions are located about 45 kilometers southeast of Magdalena de Kino in north-central Sonora State. Historic mines within Cerro Caliche include Cabeza Blanca, Los Cuervos, Japoneses, Las Abejas, Boluditos, Colorado and Espanola, which operated during various periods up to about 130 years ago.

Mineralization types of the Cucurpe mega-district include variants of epithermal low sulfidation, epithermal mineralized dikes and associated volcanic rocks, and sub-adjacent mesothermal Carlin type gold mineralization. These deposits in the district appear to be genetically similar with mineralization ages ranging from 40 to 30 Ma. Local altered felsic dikes cut the mineralized meta-sedimentary rock units and may be associated with mineralization in both the dikes and meta-sedimentary rocks. The Cerro Caliche area is a sub-district of the Cucurpe gold mine district with many gambusino workings and exploration pits in the concession area as well as drill holes.

The Cucurpe mega-district has generally been regarded as a vein dominated district including the operating Mercedes and Cerro Prieto mines. Activities at Cerro Prieto and Santa Gertrudis mine areas have developed open pit resources in recent years with more disseminated to stockwork style gold mineralization.

Host rocks include Jurassic-Cretaceous metasedimentary rock types including argillite, shale, quartzite, limestone, quartz pebble conglomerate and andesite. Intrusive rock consisting of medium coarse-grained granodiorite is present in the western parts of the project near the Cabeza Blanca mine. It is apparent that veining cuts the intrusive stock. The granodiorite also shows evidence of weak metamorphism, with chloritic alteration and irregular lineation textures. Rhyolite occurs in irregular bodies distributed in higher elevations in the northerly part of the concession, including the Rincon area, where it occurs as flows, sills, dikes and rhyolite domes. Part of the rhyolite is mineralized and appears to be related to epithermal gold mineralization throughout the project.

Sonoro Metals Corp. is an exploration and development company with two precious metals properties in Sonora, Mexico and one in Alaska, USA. Sonoro’s skilled exploration team in Mexico is headed by Hermosillo-based geologist Melvin Herdrick, with 45 years of mine related experience, including 10 years as Chief Geologist for Phelps Dodge, Mexico and 7 years as Vice President, Exploration for Pediment Gold in Mexico until its takeover by Argonaut Gold in 2011. Sonoro’s Chief Geologist and Qualifying Person is Stephen Kenwood, with over 20 years of experience in mineral exploration and development.

On behalf of the Board of SONORO METALS CORP.

Forward-Looking Statement Cautions:
This press release contains certain “forward-looking statements” within the meaning of Canadian securities legislation, including statements regarding the completion of a proposed Offering and the use of the Offering proceeds to further explore the Company’s Cerro Caliche project. Although the Company believes that such statements are reasonable, it can give no assurance that such expectations will prove to be correct. Forward-looking statements are statements that are not historical facts; they are generally, but not always, identified by the words “expects,” “plans,” “anticipates,” “believes,” “intends,” “estimates,” “projects,” “aims,” “potential,” “goal,” “objective,” “prospective,” and similar expressions, or that events or conditions “will,” “would,” “may,” “can,” “could” or “should” occur, or are those statements, which, by their nature, refer to future events. The Company cautions that forward-looking statements are based on the beliefs, estimates and opinions of the Company’s management on the date the statements are made and they involve a number of risks and uncertainties. Consequently, there can be no assurances that such statements will prove to be accurate and actual results and future events could differ materially from those anticipated in such statements. Except to the extent required by applicable securities laws and the policies of the TSX Venture Exchange, the Company undertakes no obligation to update these forward-looking statements if management’s beliefs, estimates or opinions, or other factors, should change. Factors that could cause future results to differ materially from those anticipated in these forward-looking statements include the inability of the Company to secure sufficient subscriptions to complete the Offering, the risk of accidents and other risks associated with mineral exploration operations, the risk that the Company will encounter unanticipated geological factors, or the possibility that the Company may not be able to secure permitting and other governmental clearances, necessary to carry out the Company’s exploration plans, and the risk of political uncertainties and regulatory or legal changes in the jurisdictions where the Company carries on its business that might interfere with the Company’s business and prospects. The reader is urged to refer to the Company’s reports, publicly available through the Canadian Securities Administrators’ System for Electronic Document Analysis and Retrieval (SEDAR) at www.sedar.com for a more complete discussion of such risk factors and their potential effects